THINK OUTSIDE THE GLASS

Hailed as one of the most influential bartenders on the international bar scene, Alex Kratena looks at the role of design and how to inspire and delight. 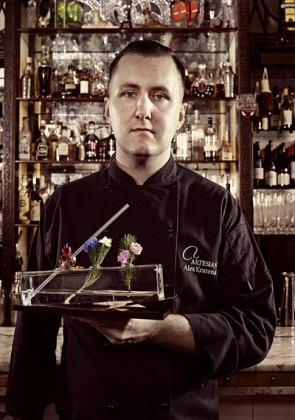 There aren’t many bartenders who don’t know the name Alex Kratena. His name goes before him in all that he does. And as you can imagine, his artistry and skill is up there with some of the top bartenders around the world. It’s safe to say, Alex is one of the most out-of-the-box-thinking bartenders on the bar scene and he certainly doesn’t play by the rules—why should he?

He challenges our thinking each and every day and we have to thank him for that. After all, it’s important we review our innovations and creativity to not only help set us apart from the rest, but to also give the bars we work in the edge over competitors.

So throw the rules out the window and get your "Alex Kratena" thinking on—it’s time to reevaluate how you present your serves ahead of your bar shift tonight.

Consideration For The Elements

Design is first and foremost a philosophy, a way of making a difference to your guests and their experiences.

A glass is a way of communicating between guest and bartender, a great service piece that not only captures attention and sparks curiosity, but one that enhances all the different elements of the cocktail.

For many years, programmers formatting digital movies couldn’t figure out how to tell when one scene had finished and another had started. This was a huge problem and the mistake they had been making lay in looking for the wrong cues. They were looking for cues in pixels, unsuccessfully.

When they eventually consulted filmmakers, they revealed the truth behind editing. They told them that the hint doesn’t lie in pixels, but the soundtrack. What filmmakers do is play the sound of a scene in a movie before they show the actual picture and that’s how you separate scenes in movies. Sound always starts before motion pictures.

In any discipline, it takes people with a deep understanding of the problem to create something outstanding and I ask myself: shouldn’t bartenders be thinking about glassware right from the beginning? Why do we wait for someone to manufacture a glass if you have a very strong vision of a cocktail and classic glassware is not enough or doesn’t exist?

The glass used for a cocktail will determine how the serve will be perceived by the drinker and it is not only about the impressions that it will create—physical elements are equally important.

The glass is first of all a vessel, which contains the liquid, but at the same time, it is a control mechanism, which will determine the way liquid hits your palate, how it will taste and whether you enjoy it or not. It also controls physical properties of a cocktail, keeping the liquid cold or warm or allowing you to serve the drink in a way a standard glass cannot provide.

When designing our latest menu we came up with an idea where liquid is combined with flavored vapor to create the overall sensation. It was very easy to get our hands on a vaporizer but we had huge difficulties looking for a glass that could hold both liquid and vapor at the same time.

The obvious thing to do was to serve the drink in two separate vessels but to us this was a no-go since the tables in our bar are too small. The vessel would take too much space and it wouldn’t be comfortable to drink if you were standing at the bar. We knew straight away we needed to create a way of serving the drink that was neat, clean, flawless and operational.

Many people assume that design is a way of making things pretty after they are made, but if you dig a little deeper you realize it’s not about garnishing your product, it is about thinking about every single element of that product right from the start. 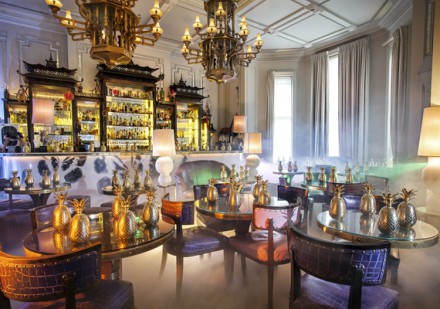 At the early stage of the design planning, we asked ourselves, what are we actually creating? Purely because we needed a clear direction of where we were going and why we were doing it.

Product development is really expensive, so we had to constantly review and cut out the unnecessary. Over the years we realized that it’s important to look at your audience, the people you are creating the serve for and, last but not least, you should always consider whether you are framing the issue correctly. 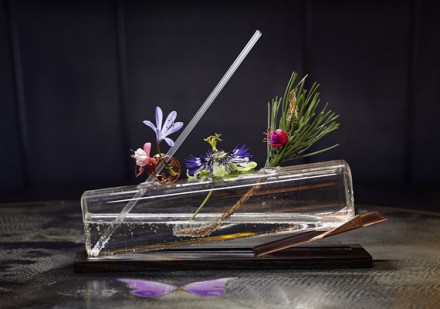 One of the concepts we’ve been working on is a serve that changes flavors as a guest drinks it. We needed to create a layered drink, a modern take on pousse-café, but we needed it to be practical and, what’s more, we needed a glass that, by its design, would be forcing you to imbibe it in a particular way.

We figured out that layering wasn’t an issue—we simply take any liquid and blend various layers with modified starch, causing different viscosities without changing flavor or mouthfeel.

The real issue we had was how to create a glass that would force you—by its design—to drink from the bottom. Luckily, in this case, the glass already existed. We had come across handcrafted ceramic cups from Carlsbad in the Czech Republic. And as you can imagine, we were pretty relieved as this saved us a large amount of money. If it already exists, it’s cheaper to buy it. After all, what’s the point of reinventing the wheel?

And always remember, the more senses you stimulate, the more your guest will remember.

Alex Kratena is widely credited with reinventing the modern hotel bar. Artesian, his bar at The Langham, London was recognized as Number 1, for the third consecutive year, in the World’s 50 Best Bar Awards. Want to learn more about Artesian cocktails? Follow Alex on Instagram @alex_kratena & Twitter @Alex_Kratena.