« back to Careers & Wellbeing
« back to BAR LIFE

THE 6 BEST AMERICAN BARS COME TOGETHER FOR ONE NIGHT

Take the World’s Best American bars, an ancient venue in Athens and a creative idea from The Clumsies and you get the American Dream Bar. Lefteris Kefalas was at the event for Diageo Bar Academy to experience this extraordinary night and to find out the key trends and tips from these top bars.

A landmark building in the heart of Athens, exclusively reconstructed for just one night. The venue became a three-level, dreamlike ultimate bar and hosted six of the greatest American cocktail bars under one roof, all of which have appeared on the 2016 list of the World’s 50 Best Bars.

The three floors that housed the six top American bars were studied, redesigned and decorated with the most representative images of American street art and transformed in such a way that, from the very moment you walked into the building, you would instantly live and breathe the authentic aura of an urban American neighborhood. .

Voted as the 9th Best Bar in the World, The Clumsies opened in Athens two years ago to much critical acclaim. Having previously created the Clumsies Hotel Bar initiative, which invited some of the best hotel bars in the world to Athens for one night, the team decided to set up another exciting event–The American Dream Bar.

It took almost three months of creatively fueled emails between The Clumsies and their six American “guests” to finalize the flavors that would be included in the dream cocktail-list of each bar: Employees Only Bar (New York), Please Don't Tell Bar (New York, known by its initials, PDT), Trick Dog (San Francisco), Dante (New York), Nomad (New York) and The Walker Inn (Los Angeles).All of them, for one single night—a mere four hours from 8:00 p.m. to 12:00 a.m.—manifested the vision of the adventurous genius of The Clumsies team for the ultimate pop-up bar project, The American Dream Bar. 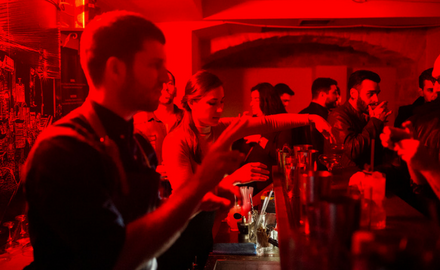 This transatlantic journey was helped by Fine Drinking by World Class and stretched from the east to the west coast of America. Six of America’s greatest bars served their impeccable signature cocktails, as well as unique Greek-flavored-inspired cocktails created especially for the night.

Apart from the ‘straight from the USA' cocktails, Athenians had the opportunity to try authentic American street food from Nomad, one of the best bar-restaurants of the world, made by its sous-chef, Michael Rellergert, who came to Athens especially for the project. 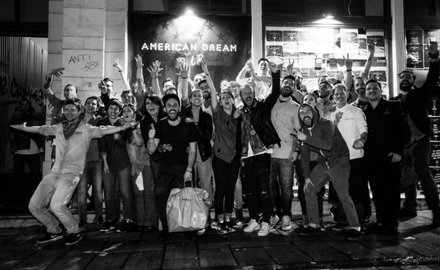 Key trends from the night 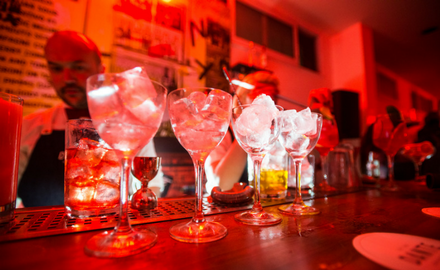 A Q&A with the team from Employees Only

After the event we took some time out with the team behind one of the most popular speakeasy bars of New York, Employees Only.

With its amazing cocktails and timeless art-deco style, accessible via a mysterious foyer fronted by a fortune teller, Employees Only was ranked as the 7th Best Bars in the World this year. We found out more about what Employees Only brought to the event and what they think makes a great bar team.

What essence of your America-based bar have you brought and displayed to Clumsies American Dream Bar project?

I think the most pivotal thing we brought with us to Greece was the tone of our bar, which we are known for. I know that in Athens, many of the bars such as The Clumsies or Odori offer a similar vibe. But in the States, you will find there is a distinct line between a cocktail bar and a neighborhood bar. I think Employees Only embodies the elements of both. As one of our owners likes to say, "We're a world-class neighborhood bar." As far as our cocktails go, I think since day one, we've always strived to bring to life classic cocktails under a modern disguise.

Since you have won the Best American Bar Team at the Spirited Awards, you definitely know—what makes a power team behind the bar and how that has an impact on customers?

Time is the most crucial component in having a great bar team. It just takes time. Our most senior bartender has been at Employees Only for over 12 years. Our newest Principal Bartenders got their jackets after 5 1/2 years of working behind the bar, starting out as stockers and then becoming bar backs. This brings me to my second observation. Our team is built up of people who have had to put in their time in order to achieve their current positions. This apprentice system ensures that knowledge gets passed down to the next generation. It's not just about sharing recipes or techniques, it's about sharing the street smarts it takes to be a great bartender—how to talk to guests, how to gauge what it is they want, how to tell who might start problems and so forth. 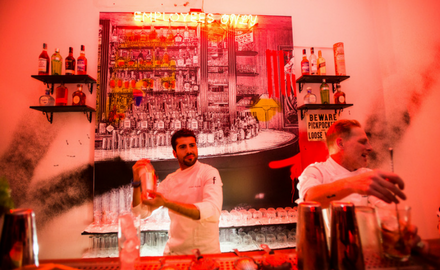 What’s the role of a table server in spreading the uniqueness of you cocktail creations to customers and why?

All of our servers must know about the cocktails. We strive to share knowledge with them and we are constantly having them taste cocktails and spirits so that they can make confident suggestions. This is crucial because it really makes service more time efficient and allows there to be a smooth transition between what the guest is looking for and what ultimately ends up in front of them.

How do you translate the term fine drinking in the contemporary bar scene?

For me, personally, I would designate as a way of describing a sort of collective consciousness in regards to what are consuming. We no longer settle for what's always been available or what we've always consumed. Instead, our culture today possesses a true fascination and curiosity with what exactly is in the glass, whether we talk about the spirit itself and how it's made or the ingredients that are being combined and where they came from. Fine drinking is a way of departing from being a passive consumer to a well-informed participant. 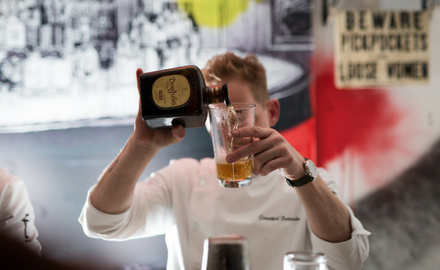 Stir all the ingredients together.

Serve over a large rock with lemon oils.

Combine all ingredients, except for Apple Brandy, in a pot and cook on medium-high heat until steaming hot.

Allow this to steep on low heat for 5 minutes.

Remove from heat and let it cool.

Once down to near room temperature, run through a fine mesh strainer and add the Apple Brandy for fortification and flavor.

This will keep indefinitely and may be stored at room temperature or can be refrigerated, if you wish.