HOW TO MAKE IT: OLD-FASHIONED

The Old-Fashioned has well and truly become a household name in bars across the world. With countless variations popping up on menus, Thomas Aske from The Fluid Movement reveals how he makes his Old-Fashioned stand out among the crowd, giving you inspiration to add your own twist to this classic cocktail.

“The most sought-after cocktail of all”

Next year marks my twentieth year working in the spirits industry. Twenty years of making drinks, talking about drinks and trying to develop new drinks. In that time, I have been fortunate enough to try a large selection of what you would call "classic cocktails": cocktails that have stood the test of time to become the defining benchmarks as to how people have imbibed over the centuries. Some of the cocktails have been popular in bursts, the Mojito or Batida for example, whereas others have transcended an entire category.

The Old-Fashioned is one such drink. I now own and operate four bars, one hotel and one restaurant, as well as a retail business. Across all of these, the Old-Fashioned remains the most sought-after cocktail of all. It is easy to see that today’s drinkers are in love with what the Old-Fashioned represents: refinement, sophistication, balance and heritage. In my opinion, it truly is the king of cocktails. 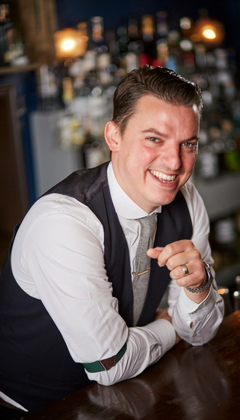 Although the history of the Old-Fashioned is shrouded in conjecture, it is widely agreed that it wasn’t "created", so much as it evolved over a period of time from another drink, the Whiskey Cocktail.

The Whiskey Cocktail was first documented in the 1862 Bartenders Guide "How to Mix Drinks" by Professor Jerry Thomas. Thomas’ recipe called for 3-4 dashes of gum syrup (a syrup sweetener with gum arabic), 2 dashes of bitters and a wine glass of Whiskey. The mixture would be shaken and served up with the addition of lemon oils. Historically it was small and punchy, for whatever the day ahead had in store.

As the creativity and curiosity of the 19 th century bartender evolved, so did the cocktails they were creating. First came the "Improved Whiskey Cocktail", which saw the addition of a dash of Absinthe, or some other new-fangled liquor that had recently hit the market. However as we so often learn today, these quirky experiments are not always successful and it is best to stick with the tried and tested recipes—but I commend the curiosity. These inquisitive bartenders soon discovered there was no need to transform what was already a firm favourite of the masses. This curious behavior created an uprising in the demand for “Old-Fashioned Cocktails”—the definition of a simple mixture of spirit, sugar and bitters. No fuss, just balance. This new Old-Fashioned was served on a rock of ice, rather than straight up like its predecessor, and this addition has formed what we consider today to be the blueprint of a well-made Old-Fashioned.

The definition of "Old-Fashioned"

“Cock-tail is a liquor, composed of spirits of any kind, sugar, water, and bitters—it is vulgarly called bittered sling, and is supposed to be an excellent electioneering potion.”

This definition of the cocktail from “Balance and Columbian Repository”, dated May 13th, 1806, I believe also perfectly describes the way an Old-Fashioned should be made. Over the years, the recipe of the Old-Fashioned has been manipulated to include all measure of spirits, from Rum to Tequila, with sweeteners varying according to local availability, and there’s nothing wrong with this if it ultimately meets the wishes of your customers. However, from a classicist’s perspective, the Old-Fashioned should consist of the same four simple ingredients as it has for centuries: Whiskey, sugar, bitters and water (from ice dilution). My personal ratio will vary depending on the Whiskey used, but for these tips, I’ve chosen BULLEIT Bourbon Whiskey, a Bourbon with a higher rye content resulting in a dryer, spicier character.

1. Always use the finest quality Bourbon you can afford. There is simply no substitute for poor quality ingredients. I would recommend BULLEIT Bourbon Whiskey.

2. Don’t buy into the five-minute-stir myth. If the sugar is in liquid form, the amount of time the liquid is stirred or the increments of Bourbon added will make no difference. After a minute of stirring, it will be diluted, cold and perfectly balanced. If it’s not, it’s being served on ice anyway!

3. Ensure your bitters bottles are pouring accurately. Angostura bottles tend to increase their measurement as the bottle volume decreases. Counter this by decanting into a dropper bottle or using a pipette.

4. Take time with the ice. Learn to carve beautiful cubes or diamonds—the attention to detail will accentuate the sophistication of the drink (and the guest will love it).

5. Remember that this cocktail can be bottled. Create your perfect ratio and pre-bottle it for consistency and speed.

It has to be said that the best way to make any drink is the way the guest enjoys it. With this in mind, don’t be afraid to discuss and ask guests their preferences, it will only add to their experience. As for mine, that’s the classic way. 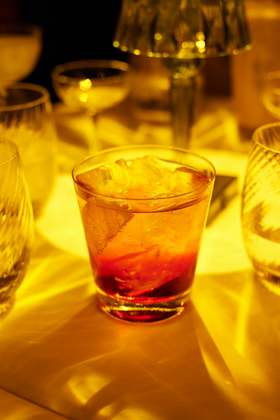 Stir all ingredients over an ice cube for approximately one minute.

Strain this over a hand-carved cube of ice approximately three inches squared.

Pour into an Old-Fashioned glass (short, heavy-based tumbler—the glass has actually taken the name of the cocktail, such was the drink's popularity!).

It is worth noting that the quantity of sugar has been increased to balance the dryness of the BULLEIT Bourbon Whiskey. Sweeter Bourbons would require less Gomme syrup and should always be tested beforehand for balance and consistency.

(*One standard drink contains 0.6 fluid ounces of alcohol, so to calculate the amount, work out 8 times the standard drink using our Alcohol by Volume (ABV) Calculator.)