The White Lady cocktail is a classic—Gin, Cointreau, lemon and some say egg white. Shaken and served. Easy as that.

Next, juice your lemon but be careful how you do it. Ueno says if you slice a lemon across the bulge and grind it against a juicer, your juice will be too sour. You’re pushing down hard, pressing oils from the skin, and forcing the white core against the juicer. “Lemons and limes are sour, but they’re fruits, so they have sweetness too,” he says. He peels the skin and pith from his lemons, slices them lengthways, then carves out the core. He then rocks the flesh gently against a metal juicer. “In Star Bar (a legendary 4Ginza bar where Ueno spent nearly a decade) we used a plastic juicer but with stainless steel, I don’t have to use so much power,” he says. 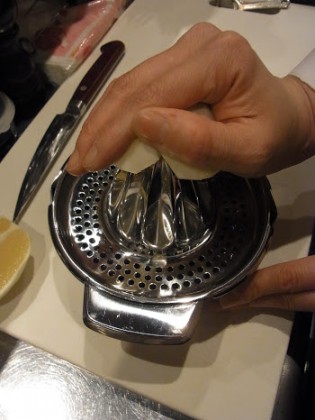 Ueno favors a cobbler cocktail shaker over the Boston variation, for the next step. “The Boston cocktail shaker is much better for egg whites. It’s also good for ice-machine ice, which is soft and gets watery fast. However, I don’t think it goes well with the ice I use,” says Ueno. He favors very hard and pure ice produced in a factory just west of Tokyo.

Add .5 oz. of Cointreau, followed by the juice. “I start from .5 oz. (of lemon),” he says. “But I usually add .75 oz., depending on how sour the juice is. In Japan, a cocktail-glass serve should be exactly 2 oz. I make gimlets that way, but not the White Lady. For me, that technique doesn’t work.”

When the balance tastes right, put the lid on and shake. Shake longer than you would for a Gimlet or Daiquiri, then pour into a cocktail glass. The perfect White Lady cocktail. Easy as that.