« back to Drinkspiration
« back to Seasonal Suggestions

It’s that time of year…the big game is around the corner. And that means lots of pizza, wings, chips & dip. But what drinks really work best with all that football fare? Donny Clutterbuck has you covered. 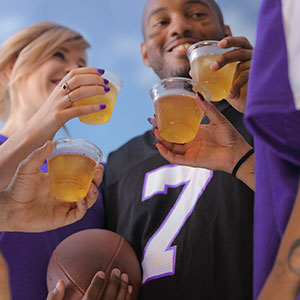 The two television rituals I most remember in my eighties-baby Buffalo, NY early childhood were the Star Trek series “The Next Generation” and Buffalo Bills games. Both were a regular, multi-family affair at a scheduled time many weeks of the year. I like to think I remember these because of socialization and tradition, but it might be another piece that drew me in so strongly-- a much more embarrassing piece: the raucous, overwhelming onslaught of pizza, chicken wings, and soda pop. Probably chips of some sort, too. This probably wouldn’t have been notable for most kids, but my parents didn’t keep or let food like that in our house with the regularity I’d have loved at the time. I still to this day look forward to gorging on pizza and other such heavy delights, though the surrounding traditions may have changed.

In my late thirties, I now live in a world where one of my prime focuses is guiding guests of our restaurant through a meal and procuring their drinks along the way. When I first sat down to think about food & beverage during game time, I began to wonder what in the world one might intentionally pair with greasy pepperoni pizza, spicy & buttery chicken wings, and potato chips with whatever weird sour cream chive dip comes beside? While wine and cocktail pairings can seem unusually difficult to pull off well in even a familiar environment, this is certainly pulling me from my comfort zone. Or is it? Let’s break it down a little.

Once we know what the dartboard looks like, we can choose our darts. In the above case, the whole game-time ensemble is a slurry of protein, starch, fat, salt, and spice. We know this game. We’ve played this game. A crisp pilsner, a bright sparkling wine, or a bitter wine spritz is a classic pairing for salty potato chips, fried chicken, or really anything including the rich and powerful, salty, fatty, greasies we snack on at happy hour. We want bubbles and acid to counteract salt and tear through fat, some sugar to keep up with the richness, and a bit of length to wash it all down. After all, if these are to be the kinds of foods with which we’re inclined to gulp through beverages, we’d best stick away from Manhattans and the like. We move to those favorites not because someone wrote in a book that these are the correct pairings, but because they simply work. That which continues to be repeated becomes a classic for this very reason. 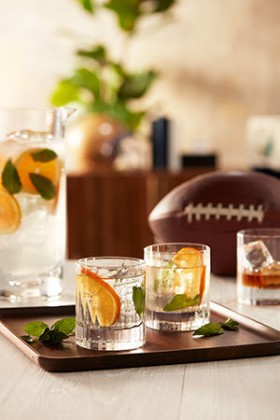 What do the darts we typically throw at this board usually look like? Like it or not, the typical pairing across the board when it comes to pizza and wings is soda pop—namely cola. Don’t you go underestimating or misunderstanding the technological marvel that is cola. It’s bubbly, it’s sweet, it has length, and it’s bitter. As much as it pains me to admit, there are few better pairings for aggressively sweet, salty, fatty foods that are heavy on protein, dairy, and starch, than a giant glass of cola. If we’re to reverse-engineer this, we end up (I planned this, so not to worry) with options like pilsner, sparkling wine, or a bitter wine spritz. Another option, though a bit on the nose, is any decent one-and-one. Cola being a solid pairing for this quite

At the end of this all, we’re facing a very high amplitude series of flavors and textures from this sport-game-appropriate food, and we need a loud and voluminous drink to pull it off properly. From the second you bite into a pepperoni pizza, you’re very aware that you’re eating something that has a lot going on. If our drink is to not be as pungent as our food, we’ll be missing the mark entirely. As an example of why matching the depth or presence of a drink with its food is so important, and to illustrate that cola isn’t a magic bullet, consider eating sushi with cola. You’d probably barely be aware you were eating anything at all, as the cola lacks the subtlety to compliment the dish entirely.

However you’d describe the experience of the dish, consider using the same adjectives as direction when building the ideal companion beverage.

I suppose it’s common that we celebrate tradition and interaction with food and drink, but the odds that these couplings are as planned and intentional as the pairings we get to exercise in the service industry are fairly low. We can look for inspiration to these common pairings (horrid as they may seem) that are already baked into our regular interactions. As we know, no one writes the classic cocktails or pairings, they just tend to work over time. By digging a bit deeper into that which seems to be occurring automatically, we can find new ways to use different tools to get the same jobs done by a new mean. Cheers to progress, and have a fabulous holiday.