« back to Trends & Inspiration
« back to ARTICLES

Thomas Aske has experience in the bar industry spanning over 17 years. Beginning as a bartender, Thomas has moved on to manage high-profile venues across the country, worked as a UK brand ambassador for Tanqueray Gin and opened his own consultancy business, Fluid Movement. Thomas also owns The Worship Street Whistling Shop and Surfside bars. As well as being a busy director, Thomas regularly writes for some of the biggest drinks and lifestyle publications, including The Spirits Business and GQ Magazine. He tells Diageo Bar Academy what inspired him to develop his career within the industry.

My love for the drinks industry was immediate, fueled initially by the vibrant atmosphere, beautiful women and diversity of people that I would meet on a nightly basis.

There are very few industries that require the variety of skills necessary within hospitality. The bartender acts as a confidant to their guests, casually adapting their personality to ensure that it is mirroring the person in front of them. All the while scanning the room to ensure equal levels of attention are paid to all. The level of skill and dedication required to be a professional in this industry are often overlooked but, as with any industry, if you work hard to become the very best, the rewards are limitless. 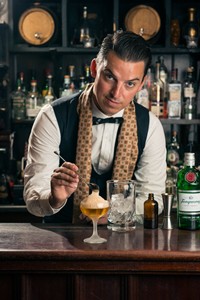 There have been many opportunities that arose that I could have, and nearly did, pass on that would have resulted in an entirely different destination today.

The first was deciding to enter a cocktail competition, which was one of the most important factors in defining my career. Hours were spent researching classic cocktail ratios, flavor combinations and innovative techniques as well as designing a few "bespoke" creations—they were pretty basic but nonetheless tasty! As my turn to take the stage arrived, the paralyzing fear of presenting in front of judges took hold and for the next five minutes I proceeded to mumble my way through a mediocre presentation. Needless to say I didn’t win. However, what this did provide was a networking opportunity to meet brand representatives and peers. It also provided me with a clearer insight as to what was required to win a competition and the importance of understanding the sponsor brands.

I attended a Diageo recruitment day for a sales-based role, however I was unsuccessful in my application. As it turned out, this happened to be a blessing as only a short time later I was recommended for a role as UK ambassador for a brand I had adored for some time. This new role allowed me to focus more time on liquid knowledge. Instead of mixing drinks until the early hours, I would read until the early hours on spirits, cocktails and history.

Within a year, it was time to move on again to look after Diageo’s elite Reserve Brands portfolio and work with some of the most knowledgeable ambassadors in the country. My fear of public speaking quickly subsided with up to three training sessions being conducted per day, something that still benefits me in my consultancy work.

In the five years that followed I was lucky enough to visit a variety of distilleries to grow my understanding of the production methods and brand culture. In making the move from behind the bar to representing a brand, I was in a position to gain an insight into the commercial processes of Diageo and while my goal to own my own bar had not changed, this commercial understanding proved invaluable when negotiating brand support and partnerships in the future. 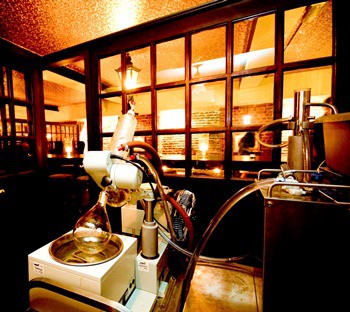 In October 2009, I sat down for a pint with my Reserve Brands work colleague (and now business partner) Tristan Stephenson. We both had long-standing ambitions to own our own venues but unfortunately didn’t have the funds to do so. We discussed the potential to form a business that relied solely on our knowledge without the need for capital and how we might leverage this to create the initial investment for our own site‐this is where Fluid Movement began. However, there was a bit of a dilemma. A consultancy business needs marketing and a solid database of clients and results—we had neither, making the move from Diageo’s security to the unknown all the more daunting.

Five months later, a pivotal moment acted as the catalyst to our entire business. An email from an ex-colleague brought to our attention the opportunity to consult on a 400-capacity bar and restaurant in Baku. He happened to be consulting on the food and asked if we would like to pitch for the work in central Asia, developing the beverage concept. In order to deliver this and kick-start Fluid Movement, we took a leap of faith by resigning from our roles and committing to delivering our first official contract. At this exact time we found an empty basement site situated in the heart of Marylebone, London. Every penny earned from our first consultancy job barely afforded us to complete the refurbishment works required for what would become our first bar, Purl.

In eight short months we had gone from being Brand Ambassadors to running our own consultancy business and achieving our life goal of opening our own bar. The lessons learned over the last 12 years stuck fast in my mind and realization hit home that this was only the beginning. More bars fail than succeed and we had nothing other than a belief in ourselves. We used the last of our money to purchase bicycles from Camden cycles (having handed back our company cars) and proceeded six days a week to cycle into Marylebone and back to be the cleaners, maintenance men, bar backs and bartenders. Business began slowly and working weeks regularly exceeded 80 hours, as we covered every possible shift to lower operating costs. The work was manageable but not sustainable in the long term. While we believed in what we were doing and were trying to push quality and innovation, nobody outside of the bar industry knew we existed.

Then something changed, you could say another stroke of fortune. Time Out visited and was seemingly impressed by the then-trendy theatrics of our cocktails, awarding it five stars. Business tripled overnight. The influence of consumer media became clear and how much consumers trust professional reviews. Building on this early success, we then saw an increase in consultancy work driven by the reputation Purl was gaining. It was this consultancy revenue plus Purl’s profits that paid for the opening of The Whistling Shop 12 months later and the ill-fated Dach & Sons a mere 12 months after that. Dach & Sons was poorly thought out. Our overconfidence gained from back-to-back openings led to an oversight in both the projected set up and running costs that rendered us with a business that wasn’t financially viable. I now believe strongly in the saying "you learn more from your failures than your successes".

As the prices of licensed premises in London sky rocketed around 2013 and the financial feasibility of opening sites became a lot more risk heavy, we began to look at special business opportunities. This led to us acquiring a small beachfront restaurant in Cornwall. The previous owner had struggled to sell his pasties and chips but we knew that the clientele were young, wealthy professionals and mostly working in London. We opened Surfside, a steak and lobster restaurant in 2014 on a tiny budget, completing all of the renovation works ourselves. The rent was far lower than London, there was less competition and we had a captive audience for eight months of the year.