« back to Trends & Inspiration
« back to ARTICLES

BIG SHAKES AND HOT TAKES: INDUSTRY INSIGHTS FOR THE YEAR AHEAD

Out with the old, in with the new; with another year behind us, we asked 3 leading trade figures what big topics they expect to be dominating the industry in 2019.

With consumers increasingly seeking more holistic, traceable goods across every sector, we consider how the hospitality industry is reflecting this through sustainable practices, hyper-local sourcing and low ABV serves. 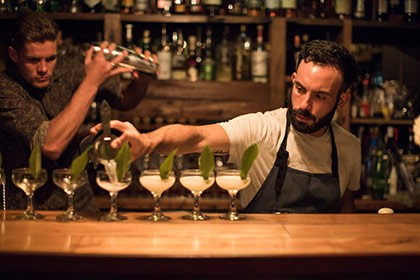 With over 17 years’ experience in the hospitality industry, Melbourne-born Tim Philips is Australia’s most decorated bartender. His resume is scattered across the globe and includes Black Pearl (Melbourne), Milk & Honey (London and NYC) and The Clubhouse (France).

He currently resides in Sydney, where he co-owns Bulletin Place and Dead Ringer.

Sustainability has been a buzz word for a while now, however - not enough progress has been made in any way, shape or form when it comes to reversing the effects of pollution and climate change. There’s still a long way to go.

Costs are often the main barriers to bars using more sustainable practices,but as a creative industry and one that interacts with so many others, I think there must be an onus on us to show leadership. Cost and profit can’t be the be all and end all to everything in this game, we’re in the people business after all.

I think it’s become easier to implement sustainability into bar programs, even since last year. Cutting straws and napkins was a great start, but we have to keep the momentum going in the anti-waste movement in this industry. It’s simple: use as much as you can and compost what you cannot.

Customers are seeking ‘greener’ choices and these changing mindsets are helping support decisions to act more sustainably. When people choose where to drink, what to eat, where to shop and how they spend their money, they are supporting the mission and beliefs of a business with their dollars.

Some practices are easier to incorporate than others,but you have to look at the bigger picture. When you consider the number of bars in the US that use solo single-use plastic cups – for every drink – it makes actions like my 45-seater cocktail bar removing straws seem like a drop in the ocean. I think it’ll take a collective effort or regulations to ensure everyone is on the same page. 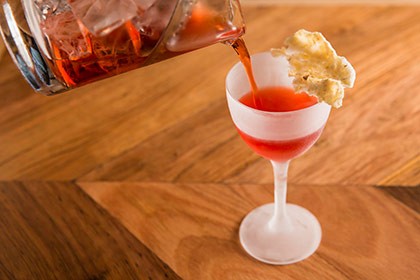 After juicing, we were left with the skins and pulp of a pineapple and wanted to waste nothing. We decided to create a ‘jerky’ by: first, dehydrating the fruit, then marinating in fino sherry for a week and blending before drying.

We used fortified local wines from Australia to limit the drink’s air miles and managed to maximize the flavor and yield from a single pineapple. Fun tip: eat your waste after juicing. You’ll be surprised at how much flavor is left.

1. Stir over ice until diluted.

2. Strain into a chilled cocktail class. 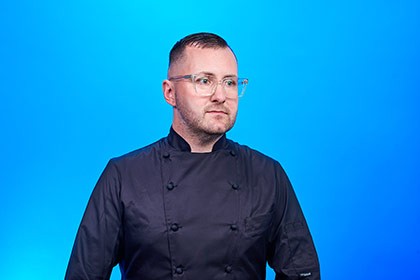 In 2018, Harpers listed Alex in ‘The Hot 50’ list, recognizing key influencers and innovators in the on-trade; he currently fills multiple roles at Taxonomy – a creative studio in London that offers expertise, creativity and connections in the cocktail world. His favorite desert island drink is a ‘bottomless’ ice cold beer.

Sourcing ingredients locally isn’t a choice anymore, it’s a necessity.The practice helps your community and environment. It grants you flexibility and greater control. It reduces supply chain costs and allows you to showcase the really interesting local things out-of-towners want to see.

Both guests and bartenders drive sourcing locally in the search for regional and local identities. The desire for traceable products is a result of endless food scandals that directly translate to the beverage world. This growing sentiment is partly fueled by a growing ethical outlook; there are sincere concerns over the environment and products made under exploitative circumstances.

There is no single recipe on how to achieve the balance between local vs global as it’s hugely determined by the concept itself. There’s no ‘one size fits all’ answer and the balance should arrive from self-consciousness of whoever is designing the concept or program.

Implementing local sourcing is a matter of effort – generally speaking, it requires more energy as it’s not just ringing in your order, but it’s much more rewarding at the end of the day.

Small local suppliers can be less efficient with restricted economies of scale. On top of this, other concerns can lead to a resistance to change from bars; staff/supplier connections can bring issues with ethical supplier selection and smaller suppliers can become too dependent on buyers.

These issues can be tackled by connecting directly with producers, visiting their production facilities and creating authentic, mutually beneficial relationships. Do the hard work. Locally sourcing requires an extra push, but the long-term rewards are worth it. 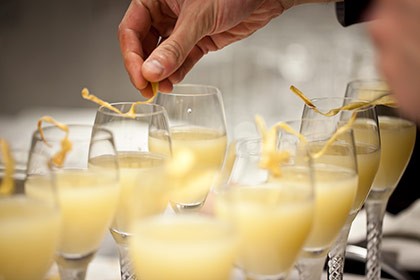 The inspiration behind this drink is a seasonal and savory take on Bellini.

When looking to create something similar simply substitute, add, invert, or delete something from established recipe equation

This recipe champions local produce by using ingredients that all come within an hour’s bicycle ride from my house.

1. Place all ingredients in shaker, add ice and roll.

Jon has been in the bar trade for what he describes as roughly “way too long”, starting off busing in a popular chain in Edinburgh before climbing his way up the ladder. After joining the celebrated Bramble in 2013, Jon operated as Bar Manager before moving into his current role in 2015, where he is Group Operations Manager for Bramble, the Last Word Saloon and the Lucky Liquor Co.

The thing that draws me to this industry is the people, without a doubt. I’m not going to lie, making drinks is fun, but at a certain point, the interesting part of service is seeing how an experience can transform a guests’ day or night. After all, that’s actually the job - to help people enjoy themselves and facilitate connections and memories being made around great service, food or drinks.

Low ABV drinks is something that factors into this pretty well;we’re starting to see more awareness about wellness and self-care from both customers and staff, so it’s becoming increasingly important for our bartenders to be able to cater for requests for lower strength drinks. We’re not getting a flood of requests, but it’s not insignificant either.

However, I don’t know if I personally see a debate around the place of low ABV drinks within drinks programs. Drinks like the Bamboo Cocktail date back to the early 20th Century, and early versions of the martini, like the Turf Cocktail or the Marguerite, typically call for equal parts of gin (or genever) and vermouth, which will put that drink a lot lower in alcoholic strength to how they’re generally served these days. These drinks have always been part of the canon, even if they’ve generally been overlooked for a while.

Focusing on low ABV drinks also gives bartenders the opportunity to really get into using ingredients that are often used as a secondary flavor in a recipe. Vermouth, it should be noticed, is delicious, as are any number of other aperitifs, amari, liqueurs and fortified wines. There’s no need for these products to be always be playing second fiddle to a 40% ABV spirit. 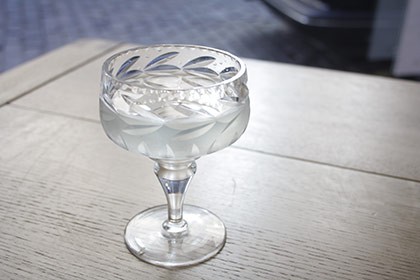 At Bramble, we tend not to treat creating low ABV drinks any differently to creating drinks with higher strength spirits; we go back to the flavor of the thing we’re working with and go from there. Some lighter Italian style aperitifs lend themselves well to sour style drinks, while some of the richer, sweeter vermouth and sherries often work well in something like a reversed Manhattan - try using two parts of sweet vermouth to one part of rye whisky or bourbon.

We’ve also tried to avoid making too big of a deal of it when we’ve included lower ABV drinks on our menus. When we’ve done it, it’s because we think it’s a great drink rather than thinking it’s a thing we should be praised for having done.

A few years ago, the Bramble team created the Reverse martini: taking a standard martini recipe, and simply swapping the measures of gin and vermouth.

The resulting drink gives you everything you want from a martini - super chilled, a thick mouthfeel, and buckets of herbaceous flavor without being super sweet - but with the benefit of not being a solid 50ml of liquor in a tiny glass.

1. Stir all ingredients with ice and strain into a chilled cocktail glass.

2. Garnish with a twist of lemon zest.