« back to Business Tools & Resources
« back to BAR BUSINESS

LEARNING FROM THE WORLD'S BEST BARS

Challenging moments can have a monumental impact on the bar industry, transforming the way we provide hospitality. Holly Graham, Managing Editor of DRiNK Magazine and Academy Chair for The World’s 50 Best Bars and Asia’s 50 Best Bars offers an in-depth insight into how the world’s best bars are coping with trials and change. 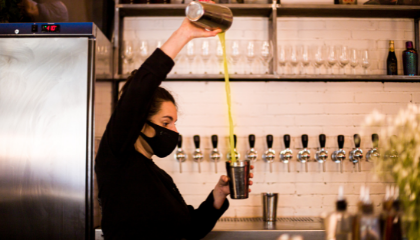 The World’s 50 Best Bars announcement is always a proud moment for bars across the globe, and while restrictions have been extremely challenging for the hospitality sector, these have brought some welcome changes and celebrations.

Notably, Two Schmucks (Barcelona) clocked in as a new entry at 26; Maybe Sammy (Sydney) won the Art of Hospitality award and rocketed to 11, crowning them the Best Bar in Australasia and Bar Trigona (Kuala Lumpur) made its debut at 44, after consecutively winning the Sustainable Bar award at Asia’s 50 Best Bars 2019 and 2020.

But what have these bars got which makes them great? How have they used adversity for good?

‘Maybe Sammy’ possesses all the hallmarks of a classic cocktail bar and exceptional hotel-level service, combined with the team’s trademark madcap style of hospitality thrown in. They deliver top-notch hospitality in a number of ways, including:

The team allows themselves to have fun during service, and as a result, guests do too, making them feel more relaxed. But to do this, they must be prepared. According to co-owners Martin Hudak, they spend 80% of their energy on pre-opening prep and briefings, etc. The other 20% is for cruising around and enjoying the shift and entertaining guests. Not many bars sing, dress up, dance, blow bubbles and do fire shows behind the bar like this team.

-By building an outside terrace, the team established new ways of working and extended the experience to guests outside. This enabled the venue to hire more staff and grow its team during a difficult time.

-Responding when opportunity knocks. The team has weathered a difficult time thanks to utilizing government and landlord support, selling merch and bottled cocktails, and relying on pizza deliveries from their sister venue Maybe Frank. With the rise of bottled cocktails, 'Maybe Sammy' has gotten into the homes of people who had never been to or heard about the bar, and the team is taking it one step further by launching their own range of premium bottled cocktails.

-Taking a closer look at the market, the team at Maybe Sammy identified a niche opportunity to sell both coffee and mini cocktails all day – something currently not available in Sydney – and opened Maybe Sammy Junior in the city’s CBD. The team realized that Maybe Sammy puts out around 300 mini cocktails on a busy Friday night so there is clearly a demand for them, and the team’s various expansions are a promising glance into what life looks like on the other side of the pandemic. 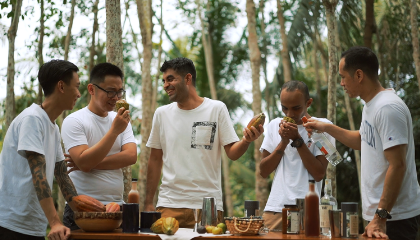 THE NECESSITY OF SUSTAINABILITY

Over in Malaysia, Bar Trigona at the Four Seasons Kuala Lumpur is fast becoming a pillar of sustainability. To date, the venue has implemented several initiatives to protect and benefit the environment and celebrate local produce while making guests part of the solution.

Some examples of the innovative sustainability programs they have include:

-The Adopt A Hive program – The stingless trigona bee produces unique honey from coconut nectar that Bar Trigona features in several of its cocktails, and this scheme allows environmentally conscious supporters to adopt a beehive at Dino Kalulut’s organic trigona honey farm. The program also helps young apiarists learn traditional beekeeping skills, to support the future growth and protection of local bees by giving them a safe place to thrive.

- The Tree-Volution project – This scheme was borne out of discussions to keep the team motivated and engaged during a period of being closed. The project aims to support Malaysian forestland and local farming communities through cocktails sales. Every time guests order one of four special cocktails, Bar Trigona donates a percentage of the sales towards planting fruit trees in local farms. The aim is to plant 500 Mangifera and citrus species trees a year – chosen because they grow quickly and fruit in a few years.

MAKING THE BEST OF A BAD SITUATION

In Spain, Barcelona’s Two Schmucks has been trying to make the best of any restrictions thrown at them. Co-founders Moe Aljaff and AJ White were touring the bar in the USA when the world began shutting down and found themselves stranded.

Unable to return to Spain and facing a unique situation in America, the duo hit the road, visiting the cities they were meant to tour and made videos with people on the ground to see what they were going through. A lesson they learned here was that when you’re faced with obstacles – do something, and they have done this in numerous ways:

-Keep the brand alive and give people a purpose

- It helped that the Two Schmucks team had invested in their merch prior to lockdowns, so there was already high demand for their products. But when faced with closure they kept their team close to boost spirits and work on videos to help keep the brand alive and boost marketing of their merchandise - all of which really helped to tide the bar over.

-Pivot is the name of the game – To become more of a cost-efficient neighborhood bar, the team quickly adjusted their offering and launched Barrio Cocktails. When the bar reopened, all staff were challenged to make a cocktail at a cost price of no more than one Euro, that could be then sold for five Euros, and it worked!

-Get outdoors – With restrictions changing, the team put a plan in action to secure a new pop up site that would allow them to cater to more customers thanks to outside seating – they called it ‘Two Schmucks on the Terrace’, with the same team, decor, music and drinks experience. Thanks to another pivot they offer a free-flow brunch from Friday to Sunday which has been very successful in terms of adding extra value and experience for their customers. 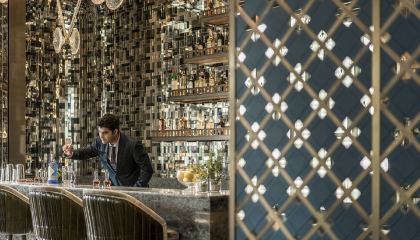 In New Delhi, Minakshi Singh and Yandgdup Lama, co-owners of Sidecar, gained huge success in the middle of 2020. The bar, while a huge hit locally, garnered international acclaim when it clocked in at 40 on Asia’s 50 Best Bars, following up with an entry at number 91 on The World’s 50 Best Bars 51-100. This made Sidecar the second bar ever from India to feature on the Asia list, and the first time an Indian bar had ranked on The World’s 50 Best Bars. This is how it was done:

-Implementing Lockdown Activations - To keep the team busy whilst the bar was closed, and their guests engaged, even from a distance. The team kicked off with virtual cocktail workshops for corporate work from home clients, individuals, birthday parties, and more. “We hosted a fair few virtual cocktail workshops,” says Singh. “The format was to teach people how to make great cocktails at home, with simple tricks and ingredients.”

-Sidecar was one of India’s first bars to come up with bottled premixes - “Due to the fact they had to be non-alcoholic, we had to jazz it up quite a bit as legally we cannot deliver alcohol in India,” explains Singh. “We sent dehydrated garnishes, added handwritten notes, created special labels, and made short videos to explain to people how to mix them correctly.” This led to the bar eventually selling cocktail kits, including shakers, bar blades, aprons and more.

-Most recently, the launch of their Three Barstools YouTube channel - “This was far more work for us, but we were lucky to partner with regulars of our bars who were already friends, and lovers of our cocktails,” says Singh. “They were filmmakers, and also unemployed, so we approached them and shared our dream to share legit beverage content, from a consumer perspective,” Singh said that this came from a realization that there are lots of beverage writers and commentators, but they would be the only bar owners and bartenders who were creating content from an industry point of view. “We’ve produced close to 50 videos with help from beverage partners and sponsors, but we are still an independent content channel – and we’re having lots of fun along the way!”

-Focus on training and upskilling - “It helped us all bond – the fact that we saw each other every day until reopening was important to us. We spoke about sustainability, unconscious bias, mental wellbeing, tequilas and everything under the sun!” 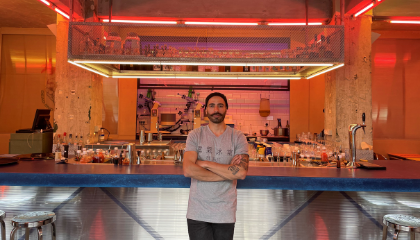 FROM RUBBLE TO PARADISE

2020 heaped adversity upon many, and the Beirut explosion in August – which devastatingly claimed many lives, homes, and businesses – also ripped through Jad Ballout’s lauded Electric Bing Sutt bar, rendering it to rubble.

When restrictions were enforced, bars had to close at 9 pm, and Electric Bing Sutt hosted a range of afternoon activations including chef collaborations. “It worked well,” says Ballout. “There were no months in minus – we would break even or even make a small profit.”

Fast forward to August, and the bar – which was fully booked and in service when the explosion happened – was gone in a few seconds. Ballout says he ran out to the street to see nothing but injured people and chaos. “Luckily, none of us got hurt, but all of our equipment was destroyed or damaged and the outside wall was gone.”

“The problem is, you need investment to open a bar,” Ballout points out. “No one was willing to invest in Beirut. We felt hopeless.” What Ballout and his team hadn’t realized was that industry friends Nico de Soto and Dinos Constantinides had set up a GoFundMe to support the team. “I couldn’t believe it,” says Ballout. “It went crazy in just a few hours.”

The platform eventually raised over €35,000, but the team encountered more stress when they couldn’t find a new spot or someone willing to take Lebanese currency. They eventually found a space and decided to build a new concept: Deadend Paradise.

“We decided not to do Electric Bing Sutt again because, in the middle of a financial and health crisis, we needed to make money, so thought something new would be more appealing,” explains Ballout. In order to ensure the success of their new venue they concentrated on the following:

-Be Resourceful - Due to their small budget, a dive bar concept seemed the most logical, decking it out with second-hand furniture and what they’d manage to salvage from Electric Bing Sutt.

-Be Different - “We figured people in Beirut needed something fun and what’s more fun than tropical drinks at a dive bar? We have a dance floor and different levels of seating, including an amphitheater to watch bartenders, plus a hammock and swing. We like to think of it as a playground and not a bar,” says Ballout. “Lebanon is a dead-end paradise – times are hard, but people still want to go out and have fun.”

-All in the Prep - Ballout says his regulars followed him and the bar has been so busy at weekends that they often have to close Mondays and Tuesdays just to prep for the next week. “I am positive, and I am happy with our new bar,” says Ballout. “I couldn’t have done it without the industry’s support.”

PLEASE ADHERE TO LOCAL LAWS & GOVERNMENT GUIDELINES AT ALL TIMES.