A JOURNEY THROUGH THE WHISKY REGIONS OF SCOTLAND WITH TOM JONES 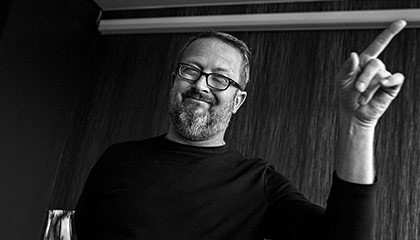 As the world’s leading source of Uisge Beatha for hundreds of years, there’s a lot of ground to cover when it comes to Scotland and its deep-rooted relationship with whisky.

Johnnie Walker draws from the largest reserves of the malt and grain whiskies across the four corners of Scotland to achieve its unmistakable depth of flavors. For a better understanding of how and where these whiskies are sourced from, we asked Johnnie Walker Global Brand Ambassador Tom Jones for a tour of the country. In the first part of this series, Tom takes us to the Highlands and the Islands. 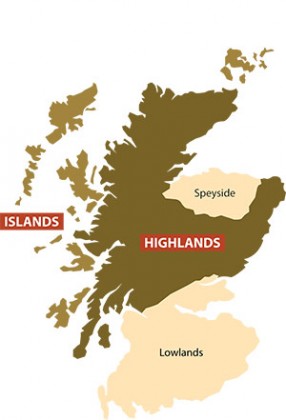 For many in the past, the term ‘Highlands’ simply meant Scotland. A region so intrinsically tied to the cultural identity of our country, it still maintains this importance today as the largest of all the whisky producing regions. This is where our journey begins.

For any avid walkers, you can walk from just north of Glasgow to the southern banks of the Firth of Tay at Perth, tracing out the imaginary line between the Highlands and the Lowlands. Bring a jacket and some boots though, it's not famous for good weather!

In the north of this region, a key distillery for Johnnie Walker is the famous Clynelish (for pronunciation, think Calvin Klein - on a dog leash).

The name ‘Clynelish’, is an anglicized version of the Gaelic for green pasture. And, though it's a coastal whisky, this is fitting for a Scotch filled with sweet floral fragrances and verdant flavor notes.

The Kildonan hills that surround the distillery were prospected for gold during the late 1800s' Scottish gold rush. As these hills directly supply the Clynemilton burn, where the distillery draws its water from, it's often been rumored you're a richer man or woman for drinking Clynelish.

For almost 200 years now, Clynelish has continued to be held in high regard for its unique combination of North Highland and maritime qualities.

Clear wort, long fermentation and distillation that maximizes copper conversation would normally produce a fruity spirit. But, unlike other distilleries, Clynelish maintains a certain amount of the natural precipitation of oils during distillation.

This contributes to its distinctive rich, waxy spirit character along with scented grass, fruits and pepper notes. It also, unusually, has spirit stills that are larger than its wash stills.

These conscious efforts to stray from the ordinary in production result in highly distinctive, celebrated whiskies and ensure Clynelish is anything but ordinary.

The Clynelish contribution to Johnnie Walker Black Label, along with other malts from the Highlands, can be best championed in a Tropical Highball. With the addition of fresh pineapple or banana chips as a garnish, grapefruit bitters and a mix of allspice and sugar as a rim around the glass the tropical, sweeter notes of Johnnie Walker Black Label really come to life.

That place is Islay, the southernmost of the Inner Hebrides islands, off the west coast of Scotland and celebrated worldwide for its whisky.

Numerous distilleries produce the island’s characteristically peaty single malts. In the northeast of the island, two tiny isles on Loch Finlaggan are dotted with the remains of an ancient settlement, including a prehistoric fort and medieval tombstones. Some say Islay is where the ancient Uisge Beatha first came to Scotland! 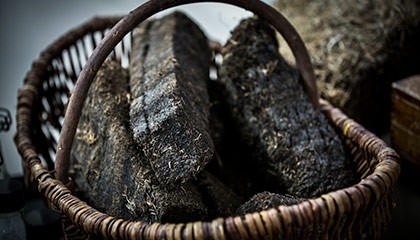 As well as Lagavulin and Port Ellen, Islay is home to the Caol Ila distillery.

Caol Ila’s distillation regime involves longer fermentation, a higher cut point, taller stills (helps to reduce the heavy phenols that are typically present in other Islay Single Malt whiskies). This makes Caol Ila highly prized for Johnnie Walker, as well as a fine choice for the enthusiast and connoisseur.

Stuart Morrison, one of our Whisky Masters, says, “There are things we do as blenders that never see the light of day. One such hidden delight is to spend time searching for casks, to seek out new flavors, to go to the east coast of Islay at the Caol Ila distillery. To stare through the giant windows in the still-house across the raging torrent between me and the majestic mountains in the distance. Now, that’s a great day at the office.”

It has the characteristic smoky flavor of Islay along with flavors as profound as smoky bacon, green fruits like pear and light grassy notes have all been attributed to this fine Single Malt Scotch whisky.

This smoky character, along with other malts’ from the island input, can be enjoyed in a Johnnie Walker Black Label Smoky Highball, with the addition of a flamed rosemary sprig as a garnish, aromatic bitters and a mix of Chipotle chili and sugar as a rim around the glass.

That’s the end of the first part of the tour. Stay tuned for Part 2, where we’ll explore Speyside and the Lowlands.