The surge in production of American Whiskey started in the late eighteenth century, with the arrival of up to 250,000 Scots-Irish and German immigrants to America.


In the 1780s, the first commercial distilleries had been established in Kentucky. At first, Whiskey that was produced from the area was known as ‘Kentucky’ or ‘Western’ and was only just beginning to be called Bourbon.

By 1833, Bourbon was being recognized and marketed as a distinctive American style of Whiskey. The use of barrels was also starting to come into play, helping to mellow the previously un-aged spirit on its long journey down the Ohio River to New Orleans, drastically changing the color and taste.

Everything was looking promising for the American Whiskey industry – just after the turn of the century, it was the fifth largest employer in the U.S.. However, this would all change with the introduction of Prohibition in the 1920s. During this time, drinking did not stop and the country was awash with illegal alcohol, most of which was of dubious quality.

When Repeal came in 1933, a number of distilleries didn’t reopen and the industry began a slow consolidation that lasted into the early 1990s.

The category has been steadily rebuilding over the years and now a new generation of top shelf Bourbons, Ryes and Tennessee Whiskeys are appearing all over the world.

Grain, water, yeast and wood are the four elements that come together in the production of American Whiskey.

In American Whiskey, the combination of grains being used in the production is known as the ‘mash bill’.

The grains used are corn, rye, wheat and barley. Generally, there will be a combination of just three of these grains in a mash bill. For example, Bourbon will use corn, barley, and rye or wheat.

1) The grain is cooked at a high temperature to create a mash.


3) The liquid is then distilled.

4) The newly distilled spirit is then filled into new, charred oak barrels and matured for a minimum of two years. 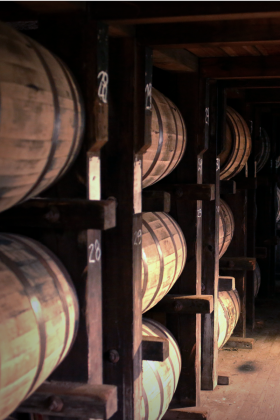 There are 3 main types of American Whisky, Bourbon, Tennessee and Rye.

Bourbon Whiskey typically has toastiness, with spice and vanilla.

Tennessee produces Whiskey lighter in color than Bourbon, with a sweet, smoky finish.

Similar regulations as Bourbon, except that it undergoes the Lincoln County Process - After distillation, the whiskey is run slowly through maple charcoal, filtering the distillate. Tennessee must also be produced in the state of Tennessee.

Rye Whiskey has spice with lots of complexity.

Similar regulations as Bourbon, except that it is made from a mash bill containing a minimum of 51 percent rye. 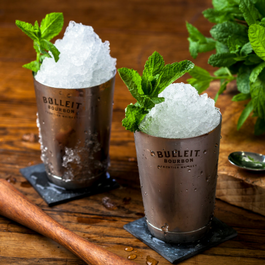 Muddle mint leaves, sugar and splash of water in a rocks glass or julep cup.

The law states that these barrels can only be used once, so they are shipped across the world to be used in aging Rum, Scotch, Tequila and even the peppers used in Tabasco sauce.

Check out some great American Whiskey brands below: