« back to Influencers & Hotspots 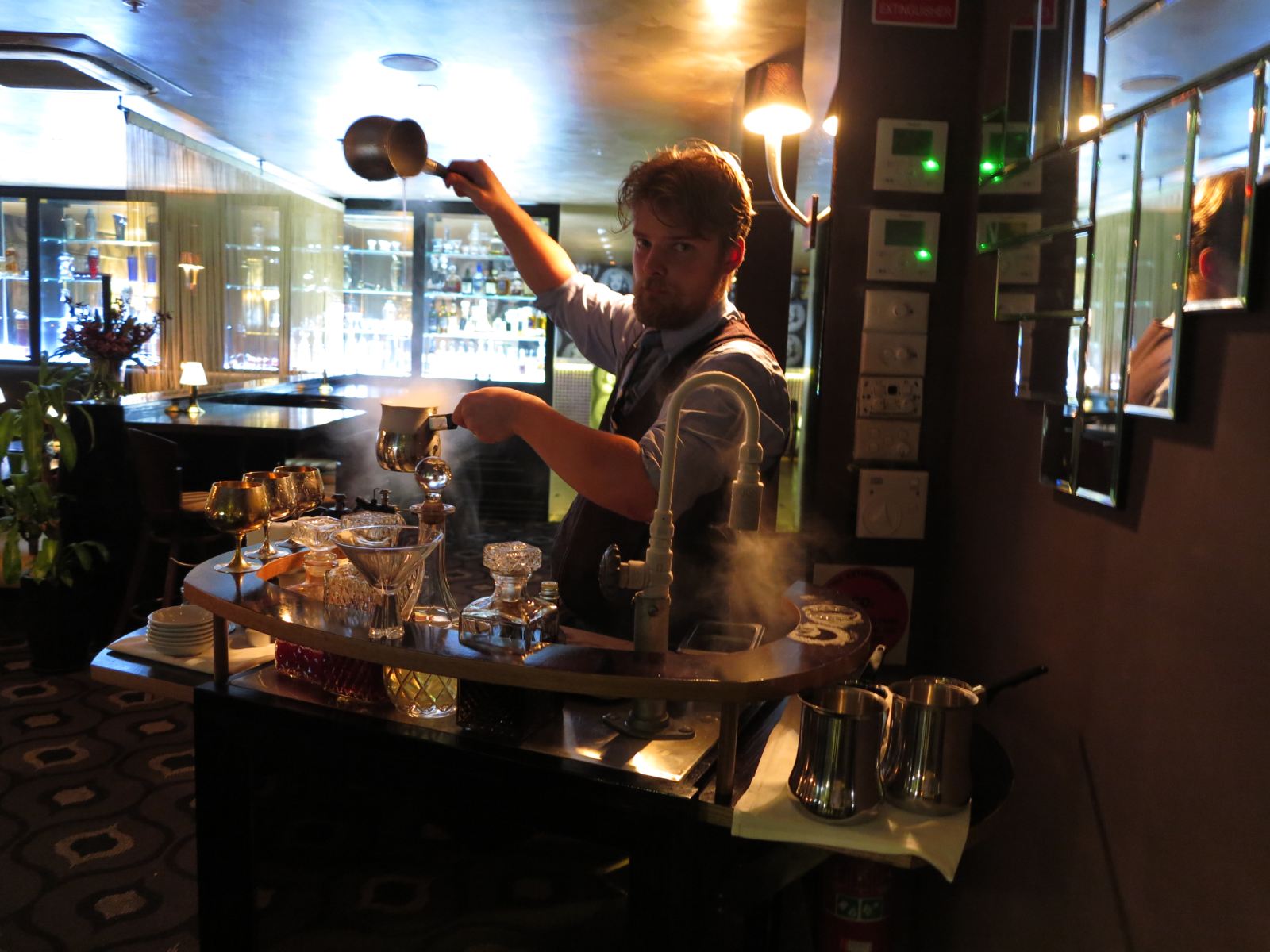 Phil Gandevia or Dr Phil as he is affectionately known in the industry for his encyclopaedic knowledge of all things drinks related, is the head bartender at Sydney's awarded bar and restaurant The Roosevelt. Situated in a historic building in Pott's Point, The Roosevelt experience is classy and cutting edge. Patrons are surrounded by owner Sven Almenning's vintage cocktail shaker collection, spirits are poured from crystal decanters, and martinis are thrown at the table from a spectacular liquid nitrogen trolley.

Can you tell me more about your life before bartending?

I was working in a law firm and bartending at night, and bartending was something I enjoyed and was far more passionate about. I thought that by being a lawyer I could try and change the world, but I can change the world for somebody in an instant by making them a particularly tasty drink. If they've had a bad day, I can make them feel a little bit better about themselves.

Did your previous career help you as a bartender?

Law teaches you to analyse people and their actions. It gives you the skill of methodical analysis that helps in understanding people and how they react in the world. 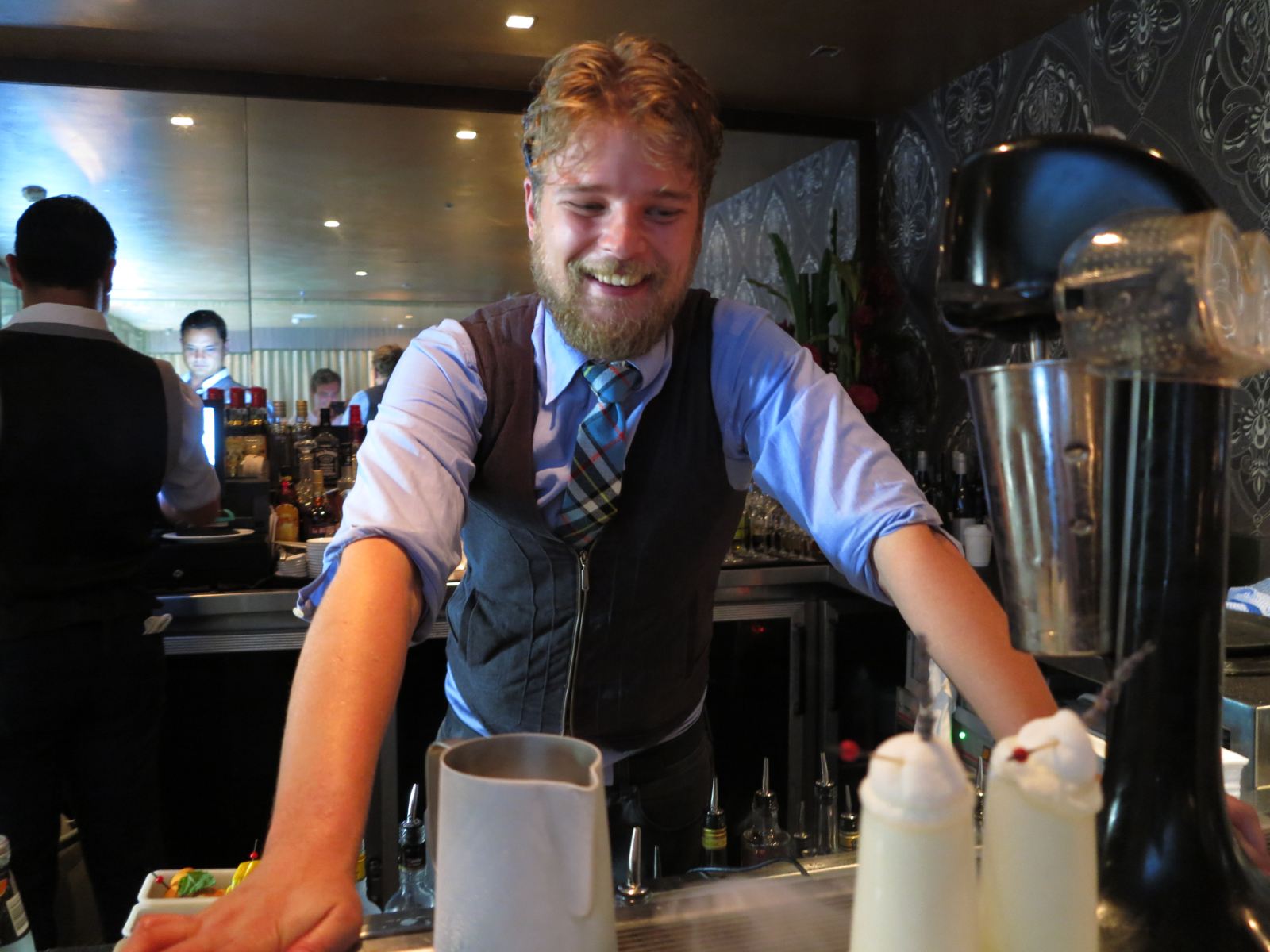 You have now worked in top cocktail bars for the past six years, did you learn any other skills working in pubs and bars before this?

Some of the most instructive lessons you can ever learn in a bar aren't those you will learn in the fancy ones, it's doing the hard slog, it's the hours cutting limes and doing jobs that force you to learn to be more efficient in your skills. You need to go to boot camp and work hard to make it to the top. You can't expect to be gifted some job in a fancy bar unless you're prepared to do a lot of work to get there.

Can you pinpoint a moment when you made a drink, or served a guest, and said to yourself "I'm a good bartender"?

I was working in a hotel bar and hadn't seen one of my guests for six months. But when he came back I remembered what he drank, and I had it ready by the time he approached the bar. He looked at me and laughed and said "I travel around Australia a lot and this is the only time I've ever walked into a bar and that has happened".

It's not whether or not the drink was good - it was the level of service, and that was much more memorable for him. And if you can't remember a person's name, you have to remember what they drink.

Which comes back to treating it like a job.

It's a job, it's a profession, and I could've chosen to do something else with my life so I take this pretty seriously. Chefs who work in professional places take it very seriously. While they're there to have a laugh and have fun, it's their livelihood; it's what they plan to do for the next 20-30 years of their life.

You speak Japanese, and once worked alongside Ueno-San. Were you inspired by his techniques?

I had the great pleasure to work with Ueno-san at Eau-de-Vie. The amount he can communicate without saying a word is incredible and the things that he can teach aren't really about ice or shaking. With a smile or raised eyebrow, or when presenting a drink with a grin, he can say alot.

How do you feel about bartenders attempting to do a Japanese Hard-Shake?

A hard shake, as Ueno-san says, is not shaking hard. It's actually more about imagining you're an ice cube inside the shaker and what would be the best way for you to move around inside that?

Is it to smash the ice at either end?

The hammer shake? No, a better way to think is not just in two dimensions but in three, and to realise that it's not shaking hard, it's shaking to achieve more aeration.

So shaking "hard" means hitting every point along every axis...

The 5-point shake. You should read Kazuo Ueda's book, he has a good explanation of this and some interesting drink ideas as well.

Are there some other bartenders who have really influenced you?

I once attended a week-long course with Marco Faraone, who at that point in time had just won Bartender of the Year three years in a row. He was someone who definitely influenced me a great deal in terms of how you serve and how you work.

Since then one of the guys who's influenced me a lot has been Barry Chalmers. I think he's influenced a lot of bartenders in a lot of different states in Australia. You can tell that every ounce of Barry is dedicated to his work. The thing about Baz is that he's passionate about everything he does, and he does it without being pretentious.

What advice would you now give to a young bartender?

Do you have advice for entering competitions?

Practice. A one word answer. Practice your drink, practice your chat, practice what happens if something goes wrong when something breaks or if you forget an ingredient. Make the drink simpler than you think it needs to be.

Can you describe your creative process?

Coming up with a competition drink is a very different process to coming up with a drink for your bar. How can you do something that's still unique, but still very much part of yourself? Come up with a story and an idea and a concept, and then the ingredients naturally flow and derive from that.

If you are drinking cocktails is there a bar or bartender that you will go to see?

I'll go to a particular bartender for a particular drink. That sounds highly obsessive but it’s true. If I want a martini, there are several bartenders I know who will make the drink well without needing to ask too many questions. But I'll try and order drinks from a bartender's list because I'd rather them make me something that they're proud of than ordering something that I could make myself. Show me something interesting. I don't need something I can get anywhere else.

Angus Burton is the Australian runner-up in Diageo World Class 2012 and has won numerous bartending competitions. His passion started with his first bartending gig: blending Ramos Gin Fizzes for friends and family 10 years ago. To Angus, cocktails are the ultimate enjoyment of purity through the realization of experiential theater. Angus writes from Sydney, Melbourne and Brisbane.