So, how about something spicy in your shaker? 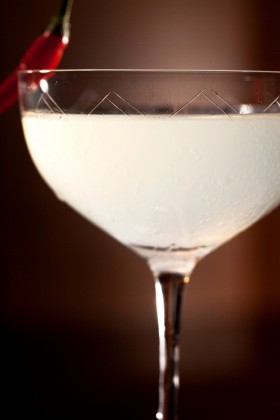 In my experience, the only time most people encounter our spicy little friends in their drinks is at brunch sipping a Bloody Mary. Which, by the way, they will probably sip twice before moving on to the fizz. What a waste, but I digress.

I find it more than a little strange that in a region like Southeast Asia, where many foods are dominated by chili, there is a rather conservative attitude as to how they are used in drinks. Back in the West, people are well acquainted with combinations like chocolate & chili and passion fruit & chili. Chili is used in many cocktails along with other spices but here in Asia, it rarely makes an appearance outside of the kitchen.

I love using them in cocktails as they give that extra boost to the experience, the tingle on the lips and the warmth in the mouth, but they do require understanding and careful preparation. A little too much can ruin the whole experience for a consumer.

So how do you go about using our fiery friends? Well, let’s leave the classic Bloody Mary out of it this time with just a mention that it’s an alcoholic tomato soup base with fish sauce (Worcestershire), chili (Tabasco) and spices. Substitute any recipe that is similar along with the local chili representative and there you go… rogan josh for India, tom yam for Thailand, kimchi for Korea, etc.

To begin with, play around with drinks you’re already familiar with; any classics or signatures that contain ingredients from the zingiberaceae family—ginger. That’s ginger, galangal, turmeric, cardamom and spices that you may already be comfortable using. The simplest and safest (in the not-burning-taste-buds kind of way) method is to use a little chili powder in a rim of salt, sugar or both.

You could also use some of the now widely available Bittermen’s Habanero Shrub. This is used like bitters and a couple of drops will add a delicate heat to any cocktail.

I’ve combined different methods before in a single cocktail. One example is a simple kaffir lime leaf, galangal and lemongrass infused Don Julio Blanco made into a Margarita, or MargariThai, with a couple drops of Habanero Shrub. Finish off with the above mentioned salt, sugar and chili rim on half the glass and a sliced chili rubbed on the other half. Sharp, refreshing and spicy.

One of the most impressive chili cocktails I’ve come across was a few years ago in London, at Salvatore Calabrese’s bar, 50. The Spicy Fifty used Vanilla Vodka, Elderflower Liqueur, honey, lime and chili. It was a divine cocktail which I’ve adapted many times since using various tweaks. The delicate elderflower and vanilla are enhanced by the fresh sliced chili, rather than eclipsed.

Personally, I have tried Cosmopolitans with a little fresh passion fruit and a slice of chili, which is also wonderful. 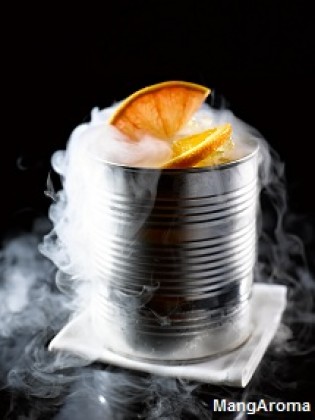 Another one of my creations, called the MangAroma, is a mix of Calvados, Belvedere Pomarancza, mango, passion fruit and chilli served in a tin can with a rosemary and marjoram fog. Sounds fancy but it was really quite simple to deliver!

The thick texture of the mango was a great "platform" to bring out the chili flavors and the pairing is common in Thai cuisine, so I thought it was a good place to start.

I found that the popular flavors (such as mango and passion fruit) were the "hook" to get people to try this drink. The less well known or seemingly strange ingredients, such as chili, Calvados, an oddly named Vodka and rosemary fog had more appeal and intrigue once they had a familiar and "safe" point of reference.

That’s one of my pieces of advice—give the guest a comfortable stepping stone or two to get them started on their path of liquid discovery.

Technique is also important here, especially when using fresh chili. I’ve found the best method is to half shake the cocktail, then add the chili, finish the shake and fine strain the seeds out with the ice shards. This stops the seeds from continuing to "cook" in the drink as it’s consumed.

Of course, there is always room for more in-depth and geeky conversations—with the right crowd and a lot of research, one could explore the prefect type of chili for each cocktail, the Scoville Scale (how chili heat is measured) or the best capsaicinoid extraction methods etc., but that’s a topic for another day.

Whatever happens, I sure hope to see more experimentation with chili in drinks!


Richard Gillam likes to be called a drink-smith rather than a mixologist and has spent the last 15 years trying to escape the booze industry which has proved astonishingly futile. Currently working in Singapore as Group Beverage Manager for Refinery Concepts, he has recently opened The Pelican Seafood Bar and Grill and the second incarnation of Kinki, an urban Japanese dining concept, in Bangkok.