Efficiency meets elegance. Aaron Shuttleworth looks at the evolution of cocktail making, and how a streamlined approach to bartending can lead to a better guest experience.

Raise your hand if you’ve ever waited over 20 minutes for a drink. You, in the back row – you can pretend you’ve only ever sidled up to a bare bar to order a bottle of lager, but you’re not fooling anyone. Get that hand up.

Since the cocktail scene came roaring back into our lives at the turn of the century, the progression has been rapid. Many of us took our initial steps through the pages of old cocktail books, ran faster than our minds could comprehend, went mad with invention and then rebelled as we became disenfranchised with what we’d created. Now that we’ve come of age, we find ourselves in a wondrous period of objective introspection, where the best drinks are equal parts efficiency and elegance.
No longer shackled by the bonds of prohibition (which we felt the need to uphold down to the very last sleeve garter), new ways to attain complex simplicity have allowed us to serve a higher volume of quality drinks, thus positively affecting both our bottom line and the guest experience.

The exact point at which we switched to a more guest-orientated experience is hard to determine. The general consensus points to sometime around the late noughties, when early wave-makers such as PDT and Death & Co – and the cocktail culture that they championed – started to transition into the mainstream consciousness.

Josh Mazza, owner of Seamstress – and a slew of other New York staples – thinks this was a business decision that’s integral to the bar’s survival: ‘People realised that a 15-seat bar model was just not transferrable to a $200-per-square-foot lease,’ Mazza says. ‘Business realities set in very quickly and the industry found new ways to adapt.’ 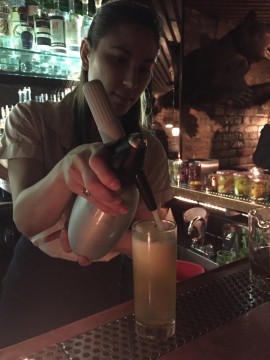 For a while, the industry relished the history and wonder of all-things cocktailian. Now, though, we find ourselves in a wonderful state of detailed refinement. This evolution was organic, not forced. Small sacrifices were made, twists were cut before the first guests arrived at the bar; multiple ingredients were put in batches to minimise the workload. The aim was to reduce the time making drinks and increase the time spent with their guests, encouraging the development of connections as opposed to transactions.

Mazza commented that bartenders realistically have three-to-four hours each evening to connect with their guests and make sure their guests connect with each other, which ultimately is what creates a lasting impression.

Ergonomics became paramount, so movement behind the bar evolved from a clunky line dance into a refined salsa, based on a key move: the 180-degree pivot. Cheater bottles became more commonplace, and bartenders at hotspots such as The NoMad and The Dead Rabbit now have between 50 and 100 cheater bottles within arm’s reach to increase efficiency and save space.

PDT’s Head Bartender A-K Hada, highlighted space as an integral point of consideration, especially given the East Village hole-in-the-wall that PDT inhabits: ‘We have 18 cocktails on our list and have to find room behind the bar for all of them. Batching was an evolution that was necessary and logical in a lot of bars, as a result of a lack of space.’ Pre-batching of cocktails – to take an eight-bottle pick-up to a two, for example – has gradually melded its way into bartenders’ repertoires and, despite bearing the wrath of many a purist, batching has become a bona-fide superstar technique.

General manager of Caffé Dante Will Oxenham agrees with this sentiment. Their menu is in a constant state of flux, with new additions having to earn their space. Both batching and a tap system have combined, to give the bartenders at Dante an edge when preparing drinks, such as their famed Pimm’s Cup, which changes seasonally.

The effect is threefold:
1. Consistency – while there may only be a small number of ingredients listed, Oxenham says that there are multiple additions to their cocktails, such as salt, sumac and aromatics, which are used to ensure the drink is perfectly balanced through the batching process.
2. Efficiency – by batching the Pimm’s and having their ginger beer on tap, the service time of the drink is greatly diminished.
3. Humanity – all of this allows for both a better product and more time to engage with their guests! 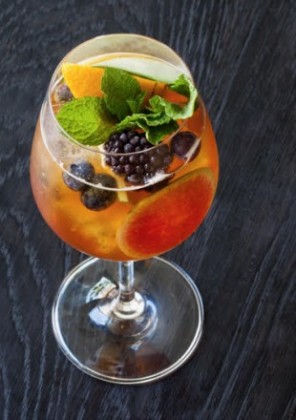 Build over ice and top with ginger beer.

A similar story prevails at one of New York’s busiest rooftop bars: The Roof at the Park South Hotel. Beverage Director Ted Kilpatrick has been at the helm since its inception in 2013. One of the major drawcards – aside from the unparalleled views and Godzilla figurines – is the armada of frozen drinks dispensers, something that Kilpatrick says he can’t imagine the bar without.

While it may seem that batching takes more time, the reality is that it just gets displaced. ‘We have to have bartenders/bar-backs come in quite early to batch up to 80 gallons of Piña Colada for a busy Friday night, along with anything else we might be batching for service.’ That equates to more than 300 litres in a single night. These guys are doing festival-grade batching every night of the week – incredible.

Cocktail competitions were once the domain of the weird, wacky and wonderful, with bartenders often turning to techniques they had little grounding in as a way to wow the judges. On the surface, it may not seem like part of the progression, but bartenders on a global stage are looking at their provenance and training for inspiration more and more. When I asked World Class finalist A-K, if she’d used any creative vessels or techniques, she replied: ‘I used glasses for all my drinks!’

It’s this recreation of technique – refined over countless nights behind the stick and reflecting the various schools that bartenders have been tutored in – that is starting to show itself in competitions. One of A-K’s drinks, the ‘Auld Alliance’, doesn’t have any of the cutting edge techniques that many associate with World Class. But the balance, refinement and complexity of the drink elevates it. 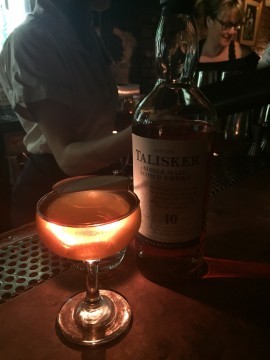 7.5ml vanilla syrup stir and strain into
a chilled coupe, and garnish with an
apple fan

As an industry, it feels as though we’ve finally reached a balance. The quality of drinks we’re producing is better than ever before, and we’ve found a way to present them in a way that allows us to uphold the core principle of our profession: hospitality.

The final word goes to Ted Kilpatrick: ‘As bartenders, we should be making sure that people are being served first and foremost and, outside of that, drinks are being served as well. Whatever we can do to put bartenders in the best possible position to do this, the better.’