Getting better with age 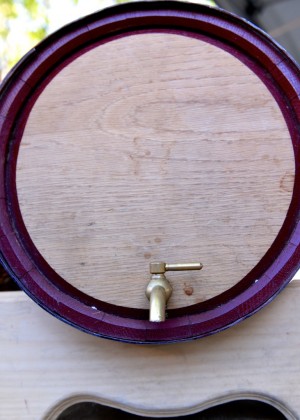 Containing spirits in wooden barrels originated as means of getting them from distilleries to consumers. Fortunately, this was prior to the days of inert stainless steel kegs, tankers and plastic barrels, so the drinking world discovered the benefits of a little interaction with wood. Since then, most barrel ageing has been under the strict control of the distilleries, but over the last few years, an intrepid bunch of bartenders have been experimenting with barrel-aged cocktails. Sometimes the results are wondrous, sometimes exciting, sometimes pretty horrendous, but with a little forethought they can be steered towards something that is an interesting twist on the original cocktail.

The first consideration is the barrel – the younger the barrel, the more character you get and the quicker you get it. A new barrel is tannic and can be overpowering, so only leave the mix in there for a short time - perhaps even just a few days (don't put in anything expensive on the first attempt!). Along with that, the smaller the barrel, the more the wood influence. It is cost-effective to buy a small five-litre barrel to run test batches of different cocktails before using anything bigger, but remember that the surface area of wood to cocktail is higher, so it will get 'woody' much quicker.

Small new barrels are available on-line (make sure they’re suitable for drink use and not ornamental), but second hand ones are harder to come by. You might have to get in touch with a winemaker or distiller, and if you do get something, it’s likely to be big. A red wine barrel-aged Negroni might be great, but you could have to make 225 litres before you find out!

Secondly it’s likely you’ll receive the barrel empty, which means it will probably leak (wood shrinks when it dries), so whether it’s new or second-hand, you’ll need to fill it with water (or something cheap) to swell the wood and seal the gaps – or else the precious contents will disappear faster than any angel can remove it!

The big decision then is what to age. Wood character imparted in this way tends to suit heavier spirits and cocktails - Manhattans, Negronis or anything dark-rum based. If you are using lighter-styles of cocktails with gin or vodka, don’t age for too long. Barrel-ageing something that's bad won't tend to make it better. In fact it will probably just get worse, so make sure you're starting with drinks and spirits that are well balanced and use high-quality ingredients (avoid cocktails with fresh juices, egg and dairy for obvious reasons).

Keep tasting the contents of your barrel until you get a wood influence you’re happy with (likely softer and richer), then serve, bottle, or take a hint from sherry (and some rum) production and keep a 'solera' style system going - taking out and replacing as you go. That way, the oldest liquid in the barrel might be a few months old and well aged, but the youngest only a few days – a combination of fresh and complex.

Finally, consider how the previous contents of the barrel will influence the next. A sweet cocktail containing sherry, vermouths or liqueurs will add nice subtle characters to a drier one such as a Manhattan coming next. Rum drinks make anything you put in there next a bit richer, while anything with a strong flavour (e.g. Absinthe) will be carried through quite obviously to the next drinks (good if you're doing a Sazerac, but maybe not what you're after for something with Scotch next).