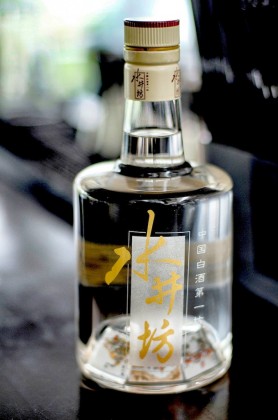 Aggressive firewater that some claim to taste of burnt tyres, or delicious, fruity and full of delicate complexity, Chinese baijiu (literally ‘white spirit’) certainly elicits a dramatic response in drinkers, but what gives this important spirit - bigger by global market share than vodka - its character?

Like vodka, baijiu can be fermented and distilled from just about anything, though most frequently from sorghum (a grain commonly grown in Northern China), maize or glutinous rice. At one end of the scale, it could taste like vodka - a neutral character column distillate; while at the other end, it could be a pungent pot spirit that will match the strongest Islay whisky for intensity. In some ways, the variety is similar to that of rum, which ranges from the light and dry Cuban styles to heavy, fruity pot still profiles.

These varying qualities originate during fermentation, where either a basic pellet yeast starter culture (xiaoqu 小麴 ) is used with a simple mash to produce a clean, light and cheap spirit, or a complex mix of yeasts (daqu 大麴 ) is applied to give a very pungent mash thats full of different congeners. By-products of the fermentation process, congeners are what gives the spirit its character.

Some baijiu brands use open-pit fermentation to take advantage of natural airborne yeasts and those that remain present in the pit walls. These produce particularly complex spirits and the older the pit, the more highly regarded the spirit. It is interesting to note that age statements on some baijius refer to the age of the fermentation vessel rather than the age of the spirit itself.

In order to retain their character, many baijius are put through a basic double distillation to retain the congeners that would ordinarily be removed in the distillation of lighter spirits. The baijiu distillation process resembles that of whisky or brandy except that those spirits would be left to age in a barrel to allow the congeners to mellow out. Baijiuproduction skips this step, which is why they can taste quite harsh to the uninitiated - especially as they are often bottled at still-strength (50-60% ABV).

Traditionally drunk with food (in small glasses, socially with plenty of toasting), baijiu is starting to escape the traditional dining environment and find its way into cocktails. The lighter styles are as adaptable as Western white spirits, while the heaver, fruity aromatic alcohols lend themselves to mixing with citrus, bitter or umami flavours. Salted plum and pomelo are two of my personal favourite baijiu mixers. Baijiu is still a rarity outside China, but available in Chinese supermarkets globally for those who want to tread uncharted cocktail territory!