ALL THINGS RUM, AND HOW IT FITS INTO YOUR BAR

Rum is a spirit with variations and flavours that span the globe, but how do you categorise rums in your bar? By colour? Don’t worry, you’re not the only one! But leading Global Rum Ambassador, Ian Burrell, explains why you need to change how you display your rums and also gives us some insight into the current Tiki and blending trends. 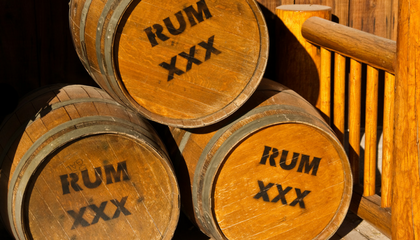 When I look at rum menus in bars around the world, quite often the rums are still being categorised according to colour: white, gold, dark, premium etc. Unfortunately, this tells the customer no more about the rum in their glass than its appearance. It’s like putting all white wines together on the menu without stating what type of grape it has been fermented from or which country it was produced in!

To help the fundamental understanding of how rums differ, bars should focus on promoting the diversity of the spirit and the fact that it is made in numerous ways and in many regions. So, don’t just list your rums according to country, like Barbados, Jamaica, Guatemala or Venezuela, but subdivide them into their different methods of production.

A light-bodied, aged white rum made in Puerto Rico, distilled from a multi-column still will taste, feel and even smell completely different to a full-bodied, unaged white rum made in Jamaica distilled in a pot still. Both are white rums made from molasses, but one is aged for a minimum of one year (by law) then charcoal filtered to take the colour out, while the other is an unaged, pure pot still rum that has been rested for a few months before bottling. The subcategory for the first rum would be “modern rum”, or simply “rum”, as it is produced using a modern method of continuous distillation. The latter would be categorised as “pure single rum” as it is batch made in a traditional pot still from a single distillery – much like a single malt whiskey. Both rums employ skill and craft to create a consistent style of spirit but, in the same way Scotch and Bourbon shouldn’t simply be classed together as “whiskey”, neither should these two distinct rums be grouped together on a menu, nor should they be used the same way in a cocktail.

Get to know different rum styles

As a bartender, it is important to understand the differences between the various styles of rum, especially when creating a rum-based cocktail. As a judge of many rum cocktail competitions, I appreciate serves where the bartender has tried to enhance the base spirit, either subtly or overtly. But more importantly, I determine if the correct style of rum has been selected for that particular drink.

For example, unaged “modern rums” tend to be much lighter in complexity, as they are blends of various degrees of heavy and light rums from multi column stills. These rums have an abundance of citrus notes, with light tropical fruits and floral aromas. They work perfectly with citrus, tropical fruits, dry fortified wines and sherries, as well as varying degrees of light spices.

Unaged “pure rums” will produce aromas like molasses, stoned or tropical fruits, grassiness, sugarcane and sweet spices. They can be more intense than their modern counterparts and push your senses to the limit. They work amazingly with stoned fruits, big tropical fruit flavours, rich fortified wines and sherries as well as robust herbs and spices. 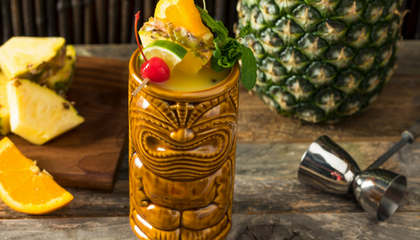 A rum trend that takes advantage of the various styles of rums is Tiki cocktails. Tiki cocktails, or “Rum Rhapsodies”, are rum-based exotic drinks, often served in a hand-carved Polynesian motif mug, that were made popular during the 1930’s by Don the Beachcomer. Even back then, the legendary bartender was mixing various styles of rums to create the base for many of his most famous cocktails. In Don’s 1934 Zombie Punch recipe, he used three different styles of rum to form the base of his drink. A heavy pure single rum from Jamaica and a lighter traditional rum from Puerto Rico. Added to this was a darker pure single rum from Guyana to give it even more complexity. Thanks to a revival in the 1990’s, Tiki cocktails continue to be at the forefront of our cocktail culture, and thanks to true Tiki establishments, such as Jeff Berry’s Latitude 29 and Martin Cate’s Smugglers Cove, it’s safe to say that Tiki is back and hopefully here to stay!

The blending of rums as a base for your cocktail is even more important in lighter-style cocktails like Daiquiris. With simple drinks such as these, you can really showcase the harmonious flavour notes of your chosen rums.

Check out this Two Rum Daiquiri for inspiration:

Shake all the ingredients with plenty of ice.

Garnish with a twist of orange peel.

The modern rum in this recipe brings a light, refreshing crispness to the drink, while the Jamaican pure rum adds depth of flavour, with aromas of stoned fruit, citrus and a touch of molasses.

These are just a few insights into the intricate world of rum, and how rum menus are starting to change and cater for the huge variety within the rum category. But this is just the tip of the iceberg! The rums covered in this piece are all made from various types of molasses. When rums are made from fresh sugarcane juice (agricultural rums or “rhums agricoles”), then the subcategories become even more diverse – but that is another story!