The evolution of the martini cocktail

With National Martini Cocktail Day around the corner, Ben Reed from leading drinks consultancy, Cocktail Credentials looks back at the history of the iconic 50/50 martini and shares three different styles that you can serve in your venue.

In my role as a Global Cocktail Ambassador there is a single cocktail that one can order in any country in the world that will instantly give an understanding as to the ability levels of the bartender and an insight into how developed the local palate is. Step forward the martini.

With National Martini Day approaching fast, it’s difficult not to think about the most iconic of drinks, one of my all-time favourites and perhaps the world’s most debated and versatile of cocktails.

The martini is no stranger to evolution. It has been served in many formats over the years of its life, beginning with the 50/50 martini cocktail – many variations of which have been based on the amount of just one ingredient that’s added: the vermouth. While this may not strike you as odd, take a moment to consider how many other cocktails you know that have this fluidity.

The changing world of the martini

If you date the martini back to its origins (c1880s it’s a little murky here) you’ll discover a predecessor called the martinez (c1860s) which contains gin and vermouth but the similarities stop there. To the Old Tom gin, sweet vermouth and bitters, maraschino liqueur were added which gave complexity and sweetness to the cocktail. From here you could argue the only way to go was drier…

In the early 20th Century the popular drink would be described today as the 50/50 martini with the gin/vermouth split being equal. By the 1940s it was half as much vermouth. The 1950s dictated 4-1 and so the balance continued to change along with consumer tastes and, the cocktail became drier and drier until the modern cocktail renaissance in late 20th century when bar staff were merely rinsing the mixing glass with vermouth to coat the ice cubes.

Then came the 1980s and 1990s, palates that had been co-evolving steadily over the decades suddenly took a wrong turn and ended up craving the sweet stuff. Fortified wine and bitters that had been a popular cocktail template for over 100 years suddenly became obsolete to all but a loyal few. This was a time when any white spirit (preferably vodka) could be flavoured with a liqueur, put in a stemmed V-shaped glass and called a martini.

The martini was saved from the 1990s but the cocktail is back and being consumed closer to its original 50/50 martini format. This is an exciting era for the martini cocktail. We’ve seen a reinvigoration of the vermouth category where for so many years’ bartenders were somewhat stifled with little choice. The aromatic bitters category has seen huge innovation in the last decade too and has returned as a valued addition to the workstation. This accompanied with the ever-growing gin offering has meant the original martini is well and truly back in favour. Establishments are now experimenting to suit the evolved palates of consumers ready and willing to drink exciting and innovative cocktails once again.

The martini cocktail has not just endured, it has prospered – it’s back and its wetter than ever! 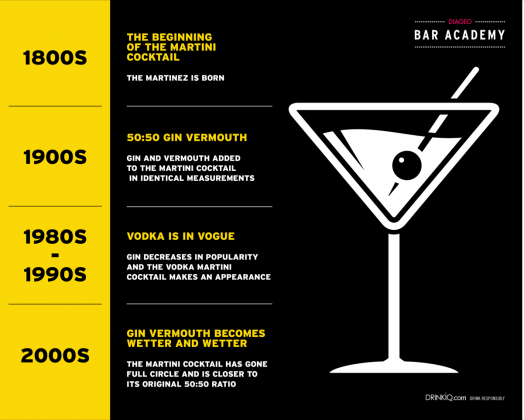 Here are 3 different ways you can serve a martini cocktail this National Martini Day! The key thing to remember is that for most classic martini serves you should always begin with a chilled martini glass in order to set the standard for the serve. Ideally the best way to chill your glass is to place in the freezer for a couple of hours, but if you are short for time then 15 minutes will do. If you are extremely pushed for time simply filling the glass with ice and cold water will work but it is not ideal.

The Precursor to the martini: The Martinez

Take a look at some more martini recipes here!