THE EVOLUTION OF THE COCKTAIL COMMUNITY

Global cocktail consultant Ben Reed explores the evolution of the cocktail community and if it’s rapid evolution is leading to other bartenders being left behind.

I’ve been travelling a lot this year and on my travels I’ve seen some fantastically honed bartenders in action. Of these bartenders, many of whom hail from far flung regions of the world, the quality has been astounding, certainly if you compare today’s standards to those of 10, or even 20 years ago, whether in the lesser known cocktail regions of the world or in the acclaimed cocktail capitals.

The cocktail world is a smaller place in this modern era. Bartenders from small towns and cities around the world can easily upgrade their skill set and their knowledge online.

If you want to see what new styles of cocktail Jeffrey Morgenthaler is whipping up in Clyde Common in Portland; what molecular craziness Antonio Lai is conjuring at the Quinary in Hong Kong S.A.R China; how Nathan Beasley is exciting his regulars at the Black Pearl in Melbourne; or how the boys at the Artesian at the Langham are finding new ways to raise London eyebrows and break moulds; it’s just the click of a button away.

Global cocktail competitions such as ‘World Class’ mean that bartenders have more opportunities to travel the world, meet other bartenders and compare styles and drinks recipes, but most importantly, evolve.

So it comes as no great surprise then that in some regions around the world there is an incongruity, a glitch in the matrix if you like and some bartenders are developing at a faster rate than their consumers.

In this article, I catch up with leading bartenders and their perception of the current bartending scene.

Packing in a Punch

A bartender who is making a name for himself (and his bar) on the global scene is Davide Segat. I was sitting with Davide, bar manager of the Punch Room at the Edition Hotel in London, when he commented, over one of the finely crafted 19th Century punches, that his policy is simple: “make drinks to please your customers, not to please yourself”.

The English palate has evolved massively since the time when I first stepped behind the bar. Superdry or exceptionally spirituous cocktails are now accepted by even mid-level discerning palates; as opposed to 20 years ago when sweeter, fruitier drinks were the norm. So, Davide can actually get away with ‘getting his geek on’ and recreating punches from 200 hundred or so years ago - lucky him! 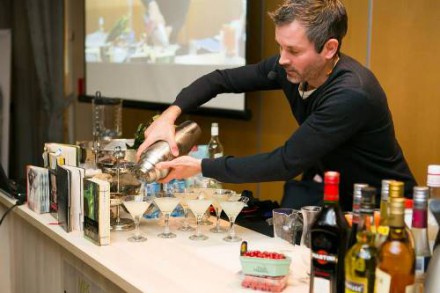 Keeping Customers Up to Speed

But what of the bartenders whose endeavour and desire, technical ability and knowledge of the DNA of cocktails have evolved at too fast a rate and have outpaced the palate, understanding and levels of discernment of the people in the country in which they work? Do you move to a country with a more evolved cocktail culture - which of course doesn’t actually help the evolution of your home country’s situation, but no doubt would further your career?

Perhaps one such ambitious young bartender is (and I certainly wouldn’t blame him for being career minded.) Devender Sehgal; a young Indian bartender who found that the tastes of the customers he was serving in his bar weren’t necessarily up to speed with some of the cocktails that he was creating.

The bar Ellipsis in Mumbai is without a doubt one of the finest in India and yet its regulars still liked their drinks a little on the sweet and fruity side. As a result, his career path was going in a different direction and he wasn’t receiving the attention of the global community that he undoubtedly deserved. So off to Hong Kong S.A.R China he went, where there is perhaps a slightly stronger cocktail culture.

However, for those who don’t want to leave, these cultural traits don’t necessarily mean you have to - maybe it’s just a question of challenging perceptions. It’s worth taking on the challenge to educate your customer, gently encouraging them to try new serves and changing the way they traditionally consume alcohol.

Some of the countries I have visited have adapted more slowly to the rising cocktail culture shared in other parts of the world. For example, in Greece, specifically Athens is very much a city in the attention of the global community recently. Those of us who travel there delight in such bars as Baba au Rum, The Gin Joint, 42 and Bank Job. Many of these bars have been recognised internationally - Baba Au Rum is still one of my favourite rum bars in the world and sits prettily in the world’s top 50 bars.

The culture in Greece is very much café-led. Cocktail culture is growing, but someone needs to give the coffee loving Greeks a firm push towards the high end cocktails you see in bars across London, New York and other cocktail capitals of the world.

‘Clumsies’, a bar recently opened by two young men who are set to became two of the hottest names on the bartending planet - Vasilis Kyritsis and Nikos Bakoulis - is a bar that pushes boundaries. As an all-day cocktail bar it has something for everyone: a private pool room; a reading room; a courtyard bar; their own laboratory - it is here that they create, amongst others, their own distillates - a large list of cocktails and a fantastic drinks menu of both high and mid-end cocktails.

When I spoke to the boys about their drinks and the accessibility of them for the Greek consumer, the answer they gave me ticked all the appropriate boxes: “We know that some of our drinks may be a little advanced for the Greek palate so we try to make them attractive and familiar on a sensory level. By using aromas and flavours that the Greeks know and love, we can endear them to our drinks, to make them feel more comfortable in ordering them and help them grow with us.

“With the ‘Conch Cocktail’, we know how much the Greek people love beaches and the sea. So, you hear the sound of the sea by holding the conch shell to your ear, you smell the sea from the conch and then you taste the sea with the vermouth”.

This seems like a very sensible approach to the dilemma that faces many bartenders worldwide. Don’t try to scare your customers away, somehow find a way to keep them within their comfort zone.

Needless to say, the bartender has to lead this worldwide revival of the cocktail. It is innovative bartenders around the world that are helping to evolve the drinking habits of their consumers. Our industry is moving forward at an astronomical rate and it is our duty to ensure we don’t lose sight of what our customer actually wants.

I’ll leave you with a quote by Henry Ford: “If I had asked people what they wanted, they would have said faster horses.” 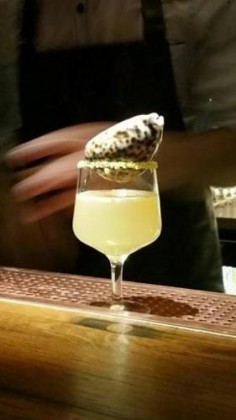 Method: Shake with ice and strain into a margarita coupette dipped in orange and kaffir lime salt**

Add 70ml Greek white wine and 65ml Greek anise-flavoured aperitif and reduce in a food processor for 13 minutes then slow cook with traditional Greek herbs: add a pinch of estragon, Greek fennel seeds, fresh wormwood and two zests of oranges and lemon. Then add sugar and measure on the brix meter until you have 22 brix.

Mix zest of 1 kaffir lime and 2 oranges in a small ramekin of sea salt.

Ben Reed is a global cocktail ambassador with 26 years in the industry. A leading light in the generation that defined UK bar culture he now writes, consults, trains and speaks about cocktails all over the world and is passionate about it. Want to hear more from Ben, connect with him online or drop him an email at info@cocktailcredentials.com.

The DON JULIO words and associated logos are trademarks © Diageo 2015.