A Vodka with a Story to Tell

As the most-awarded vodka in the world, Smirnoff has been synonymous with leading the line in quality and innovation for decades. But, how much do you know about the history behind the iconic red label? We explore the remarkable story of Smirnoff and offer up a little serve inspiration for you to try in your venue. 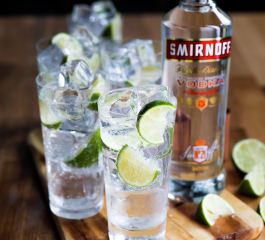 A man on a mission

All the way back in 1864 Russia, Piotr Arseneevich (P.A.) Smirnov knew he was on to something good. Born in rural farming land about 170 miles outside of Moscow, P.A. spotted opportunity in the surrounding corn fields and set out to make the world’s finest vodka.

His entrepreneurial drive and early decision to develop recipes using only the purest ingredients grew his vodkas reputation quickly.

In fact, his vodkas were so good that by 1886, Smirnov became the ‘Purveyor of the Imperial Court’, an elaborate way of saying ‘Official Vodka Supplier to the Tsar’. Which was kind of a big deal.

A son on the run

The success wouldn’t last, however. After P.A.’s third son, Vladimir, took over the business, the Bolshevik revolution in 1917 shook things up and he had to stop running vodka distilleries and start running. Literally.

Escaping imprisonment and a death sentence, Vladimir fled the country with only his treasured vodka recipe and a hastily grown moustache to aid in his disguise. Settling in Constantinople, he made plans to relaunch his father’s celebrated spirit and, after some success, set up vodka production in Poland and France. Arriving in the latter, Smirnov decided to adopt the local spelling of the family name because everything sounds sexier in French.

Following European success and the end of Prohibition in 1933, Smirnoff sold the US distribution rights and it was time for the world’s finest vodka to venture across the Atlantic. At first, US drinkers were playing hard to get; they loved their whiskey and there were no two ways about it. But, in the 1940s something changed. In the aftermath of the Great Depression, the public entertained a newfound openness, matched by an appetite for mixed drinks, and set the stage for vodka to shine.

From Russia, with limes

As with most cocktails, there is debate over the real origin of the Moscow Mule, but it is largely accepted that this icon arrived on the scene around 1943 and was first championed by John G. Martin, an executive at the Heublein drinks company.

Vodka production with a difference

In either case, an instant classic was born and its base spirit of inclusivity was loved by everyone. Crisp, refreshing and a vehicle for bringing the world’s favourite vodka to the masses, the Moscow Mule kicked off the cocktail revolution and continues to be a bar staple today. What makes Smirnoff the perfect choice for creating cocktails is its overall quality and smoothness, which is down to the unique production process.

Only the finest grains are carefully selected to create the neutral grain alcohol before being triple distilled; this process purifies the alcohol and results in a ‘lighter’ spirit. Once the spirit is distilled it may enter the unique charcoal filtration system, where the spirit passes through 10 columns of charcoal for up to 8 hours to remove any remaining impurities. Finally, the spirit is mixed with pure demineralized water to be bottled, leaving outstandingly smooth vodka.

How to use Smirnoff in your bar

This smooth vodka is the perfect partner for your vodka based creations and to get you started, here are a few serves to try in your venue: 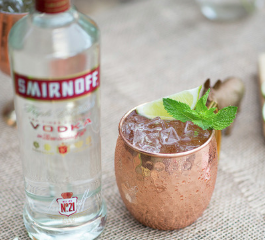 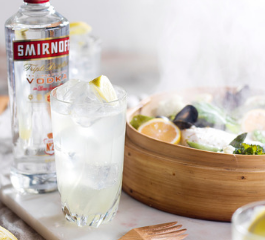