Inside the bartenders Klub 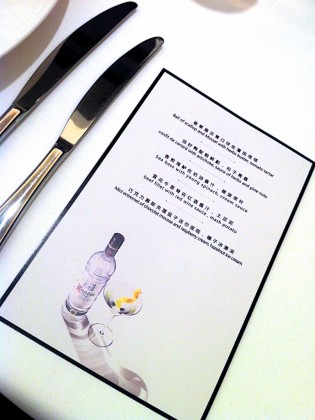 Ketel One Vodka’s success was famously driven by the very personal sales pitch of Carolus H.J. Nolet Sr. and his son Carl Jr. who took the brand on the road and sold it bar by bar in San Francisco, New York, Los Angeles and Chicago. By informing bartenders, the Nolet family made sure that the product became featured on back bars, and sold as a recommendation across them. Since then, Ketel One has maintained its strong links with bartenders, and today there are Ketel One Fraternities and gatherings around the world, encouraging discussion, ideas and camaraderie amongst some of the best bartenders in the industry.

In order to showcase Ketel One’s popularity with bartenders, the Beijing Ketel One Fraternity Klub recently held a Media Class competition, inviting some of Beijing’s best bartenders to partner with representatives of the media for their own cocktail event. The pairs were asked to create a unique cocktail using Ketel One Vodka that would match one of a series of French-style dishes tailor-made for the event by a top chef. Each pair drew a recipe at random, from a light and fragrant sea bass dish, through to a beef fillet steak or even a trio of widely different desserts.

Whilst one component was to create a cocktail that complemented, balanced and reflected the ingredients and skill of the chef (just like wine pairing, cocktails should be there to enhance the flavours, not overpower them); the other challenge was to train the inexperienced media partner to be a top bartender, able to compete at the highest level.

With the pro-bartender reduced to bar-back and commentator, the performances ranged from the well-rehearsed, almost balletic partnership of stirring spoon and ice, through to a slightly more extravagant Gangnam-style recital, and some frantic whirling of cocktail shakers as the pairs attempted to make their drinks in the allotted time.

Lessons learned? That a good cocktail always wins the day, bartending is a lot harder than it looks, and events like this are a great way to examine your cocktail pairing recommendations.