THE STORY BEHIND THE ESPRESSO MARTINI

With a history that’s almost as rich as the drink itself, the espresso martini is a staple on any cocktail menu worth its salt. Terry Cashman, London bartender and Project Manager at specialist drinks agency, Sweet & Chilli, dives into the story behind this modern classic and reveals his golden rules for the perfect serve. 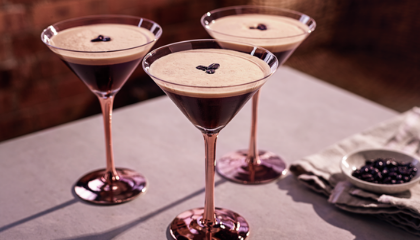 The espresso martini is a cocktail name familiar to all but the most inexperienced of drinkers, but it wasn’t always known as such. Invented by Dick Bradsell back in 1983 during his tenure at the Soho Brasserie, it was originally christened the “Vodka Espresso”. Cocktail legend has it that a young, future supermodel sidled up to the bar and asked Dick to make her a cocktail with coffee. He mixed her a drink using vodka, sugar, coffee liqueur and a shot of espresso, pulled from the coffee machine next to his station. It’s a story that has helped the drink retain an edginess that many modern cocktails have failed to replicate. Dick was the shining light of the London bar scene in this decade, and you might recognise his other creations; Bramble, Russian Spring Punch and Treacle.

It was soon renamed as the Pharmaceutical Stimulant during Dick’s time at London bar The Pharmacy, and then back to Vodka Espresso when Dick became Match Bar EC1’s opening Head Bartender. However, drinks have a life of their own once they become popular, and the tendency in the late nineties for giving anything in a martini glass the suffix – martini (Chocolate, Watermelon, Apple – take your pick), meant that it soon passed into the public consciousness as the espresso martini.

The perfect espresso martini is the very first one that Dick made. Of its time, completely original, ephemeral and unique. BUT, we can come pretty damn close with this recipe and five important rules:

Add all ingredients to a shaker

Double strain into a chilled coupette

I cannot stress how important a good quality, well-made shot of espresso is to this cocktail. You can allow the coffee to cool down slightly, as this will prevent too much ice dilution from piping hot liquid. But, just remember that coffee will begin to oxidise the second it has been ground, and you want to avoid this as much as possible, due to the bitterness created by this process. Remember, when deciding on whether to use a Guatemalan or an Ethiopian roast, there is one incredibly important rule: if your customer likes it, use it! Chances are if your customer likes a dark, nutty coffee, they are going to enjoy it in their espresso martini.

The most satisfying part of a good espresso martini is the crema; the foamy, silky layer of tight bubbles that sit on the head of the cocktail, through which the drinker must sip the rest of the drink. The natural oils in the coffee must combine with air bubbles to form the delicate froth, and the best way to achieve this is to aerate it with a good shake.

RULE 3: BE FLEXIBLE WITH THE SUGAR

Not everybody likes sugar in their coffee. 5ml of syrup will be fine for most palates, but if your customer likes their coffee very strong tasting, then feel free to leave it out. Alternatively, add a little more if you’re that way inclined. The perfect espresso martini is the one your customer enjoys most.

RULE 4: USE A QUALITY VODKA

Obviously, as the biggest sole ingredient, vodka has a large part to play in the espresso martini. You need a quality vodka than can to stand up to the coffee, and to bring something to the flavour profile other than just alcoholic strength. The clean taste of Smirnoff No. 21 vodka with its subtle hints of pepper and charcoal make it a great choice to use in an espresso martini.

It’s rare to see an espresso martini served in an actual martini glass these days, as the inward curve on the rim of a coupette is a much better way to showcase the crema and is less likely to spill over the edge if you have filled your glass to the brim. This isn’t the way that Dick would have served it originally, but progress can sometimes be a good thing. One tradition we shouldn’t overlook though, is the garnish. Three coffee beans, delicately placed on the crema to form a petal arrangement and add to the great coffee aroma in the cocktail. 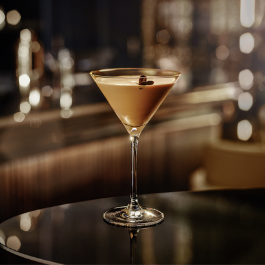 Espresso martinis with a twist

Aside from the classic recipe, there are a lot of great ways you can put your own twist on the espresso martini and here are a some of my favourites to get you started.

With the addition of Baileys this recipe makes this serve even more luxurious and perfect to serve as an alternative to dessert.

Fill a cocktail shaker with ice and pour in all ingredients.

This the perfect upsell of the classic recipe that I mentioned earlier. Using Ketel One Vodka instead of Smirnoff, this vodka’s black pepper and citrus notes are a great match for the rich, flavoursome espresso.

Add all ingredients to a shaker

Double strain into a chilled coupette

Garnish with a lemon zest

Looking for exclusive access to all our new tips, tricks and recipes from some of the biggest names in the business? Sign up to Diageo Bar Academy today!