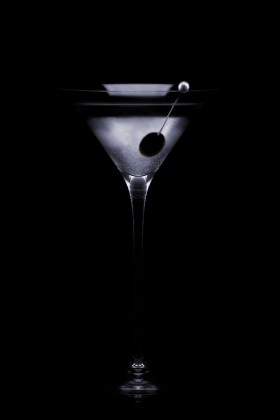 Since these nightclubs were illegal, the focus was on packing as much alcohol into as little space as possible, so customers usually drank straight whiskey, or whiskey and ginger ale, and they also drank lots of gin, since cheap gin was relatively easy to make in a bathtub.

It was during this time that the Dry Gin Martini became drier and drier since more gin and less vermouth fulfilled the speakeasy's aims of packing more alcohol into every glass.

After the repeal of Prohibition, the bars of America re-opened, but many of the skills of the old bartenders had been forgotten. The new breed knew only how to mix rum with cola, very dry Martinis, and perhaps a half a dozen other basic cocktails.

Regardless, drinks such as the Gin Martini, Manhattan, Rob Roy and a few others eventually became status symbols in the USA. By the time the 50s rolled around, it had become very stylish to be able to make and drink, the driest Martinis possible. Bartenders were also proud of their well-crafted classics that made it through the Great Drought and emerged on the other side - transformed into cocktails that represented stylish lifestyles.