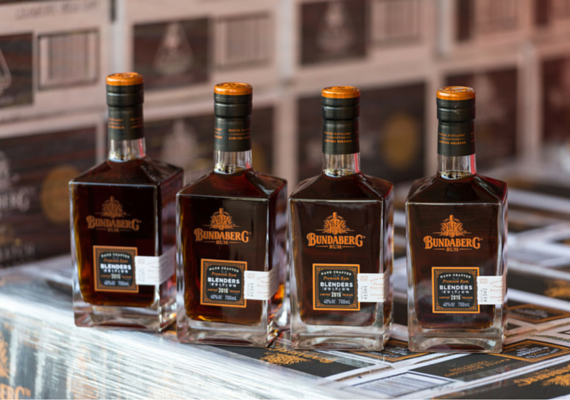 Spirits are high in Bundaberg following the news from Bundaberg Distilling Company (BDC), Australia’s most awarded rum distillery, that its Bundaberg Blenders Edition 2015 has taken top honours at the 2016 World Drinks Awards in London, after being named the Best Rum in the World.

The win signifies the first time that an Australian brand has taken the major prize at the World Rum Awards – part of the prestigious annual World Drinks Awards in conjunction with the Whisky and Spirits conference.

The announcement follows the Bundaberg Blenders Edition 2015 having beennamed the Best Dark Rum in the World – one of the sub-categories at the same awards.

In order to claim the major prize, Bundaberg Rum was pitted against the winners of five other sub-categories including Best Spiced Rum, Best White Rum, Best Gold Rum, Best Flavoured Rum and Best Overproof Rum. The final six were then judged by a panel of international experts across three rounds and scored on merit of nose, palate, finish, balance, character, complexity and quality.

Duncan Littler, Senior Brand Manager at Bundaberg Rum, said: “We are delighted to be named Best Rum in the World and Best Dark Rum in the World. To be recognised on the global stage and amongst such high calibre rums, is a testament to the quality of our product – and to the dedication of our team.”

Capping off the night, Bundaberg Small Batch also took home the title of Best Golden Rum in the World after narrowly being beaten in the same category in 2015.

“To win so many awards is a fantastic achievement for the distillery and, as a Queensland brand, the region as a whole. We’re proud to be flying the flag for Australian rum across the world and to add this award to our collection,” finishes Duncan.

Launched in May 2015, Blenders Edition 2015 is a complex yet sweet rum, finished in port and sherry barrels, delivering a long and exceptionally smooth finish. The delicious blend is layered with hints of raisins, vanilla and spice and is best enjoyed neat or on the rocks.

Each, limited edition, 700ml bottle of MDC Blenders Edition 2015 (40% ABV) carries a unique number and is available for a recommended retail price of $89.99.