The day after Christmas, around nine or ten years ago, I was doing what i typically would on this day; sitting on my couch, in my underwear, watching the cricket. Australia were playing the first day of the annual Boxing Day Test match. For those not as obsessed as I in the particulars of this obscure gaiety, a match (or a ‘Test’ as it is known) goes for five(!) days, for which on Boxing day the game commences. It being held the day after Christmas means there is generally a spread of party remnants from the previous day for you to enjoy. Whether it be half an Esky of Smirnoff Ice, three-quarters of a disposable aluminum tray of lasagna, or even a whole tub of Sticky Date Pudding, there's plenty to be had in the way of leftovers. In fact, I'm pretty sure that's why the Boxing Day Test was invented; as an opportunity for one to justify a week post-christmas spent on the couch, feasting on leftovers, whilst slowly dipping in and out of sleep in front of the TV.

On this particular boxing day luck was on my side and the surplus from the day before had me sipping an Adonis Cocktail. I found a third of a bottle, pre-made cocktail in the fridge, left by a fellow bartender type who had recently discovered the virtues of fortified wine. He had decided to mix a bottle of his favourite Sherry cocktail as gift for our festivities, and this particular morning it was just calling out to be finished off. As I sat down on the couch with the cocktail in hand and gazed in admiration at Australian Mathew Hayden blasting the hapless Indians’ bowling at the MCG, I dug my hands into an open packet of Cheezels (think Cheese flavoured corn rings). I threw a few Cheezels in my mouth and straight away I noticed something. The Cheezels were stale. Not rancid, not exactly spoiled, just old. Although this time, this wasn't a bad thing. In fact, after sipping my mix of sherry, vermouth and bitters, and eating another handful of stagnant Cheezels, it actually meant harmony in my mouth. That synthetically ‘parmesan’, along with the crusty chewy corn chip meant the stale snack bounced perfectly off the oxidised wine in the cocktail. This revelation of sorts straight away had me thinking ‘would it be safe to serve my guests stale crisps with their drinks at the bar’? But more importantly it had me thinking about what other foods would go well with cocktails. 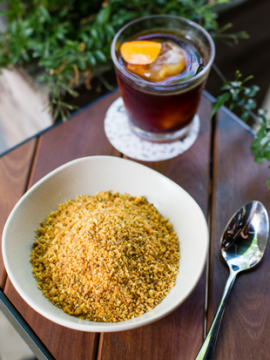 Little would I know that the idea of matching cocktails with food would emerge as one of the hottest trends for our current generation of bartenders. Neither did I know that matching cocktails would become one of the hardest skills for a bartender to master. A skill so rarely done right that up until a year or so ago I thought should have been buried in a bartender trend-bin along with raw egg white foams, blue cocktails, and smoking guns.

You see one of the reasons for most resounding failures is the bartenders interpretation of what should be accompanied with your meal is simply not better that a glass of wine, beer or cider. For thousands of years wine has been kept company with food, whilst the role of mixed drinks have been the duty of book-ending the meal (cue Aperitivo y Digestivo).

After a few recent food/cocktail matching encounters, my eyes, mouth and nose have been swayed. These matchings have all followed a certain game plan, which has convinced me it has to be applied for the betterment of our vino amigos. A few simple rules will allow you to get mixing your creations with the ones our chefs provide us.

Wine works with food for a lot of reasons. The prominent being it acts as a contrasting supporter. Wine, which is obviously made from grapes, is hardly matched with a dish because the dish contains grapes. However this notion of thought seems to be the most common connection bartenders use to partner cocktails and food. “This dessert has berries, and mint in it, therefore my cocktail will also have mint and berries”. This simplistic rational consideration to replicate the ingredients in the dish means your cocktail will subdue the dish and not enhance it, and vice versa will the dish do the same to the cocktail. Instead, cocktail matching can have the power to contrast the ingredients in the dish. Playing with levels of acid in your cocktail to refresh the palate, as well as working with ingredients that work well with berries and mint would be far more suitable. A zingy Tanqueray 10 White Lady, using Tawny Port instead of Triple Sec immediately springs to mind.

In the cocktail world, anyway. The size of your cocktail, and time estimated to drink said cocktail should correspond with size of the dish. If the dish is three bites of food, your dish should be no more than four or five sips. Keeping the size of your drinks short, sharp and fresh will ensure cocktails aren’t ‘backed up’ in front of the diner once their dish has been finished. The last thing you want is your finely balanced drink to be drunk in the wrong order, with old drinks getting ‘finished off’ together with new dishes.

Yeah, I said it. The bartender staple of 50-60ml of hard liquor should, for the most part, be largely ignored when matching food and cocktails. Besides the obvious regard for responsible service of alcohol, heavily boozed drinks seldom work with any food besides the appetizer and dessert genres. A Caol Ila Manhattan with oysters? Sure! A Ron Zacapa blazer with a Tarte Tatin? Hit me! These type of pairings leaning towards the start or the end of the gustation are more forgiving, and can be more heavy-handed with liquor. Keeping it light, delicate, aromatic and lower in alcohol throughout the crux of the meal however means you will not stray into the zone of overpowering your food. Working with fortified wines, then gesturing your drinks with heavier spirits is a good way to play.

The general rule for most cocktails is that we are supposed to get them cold, right? The colder the better! This longstanding guideline may however not be the rule for working with food. In fact the temperature of your drink, whether it be too cold, or even too warm (in the case of a blazer) may be detracting from your dish. Try playing with temperature with your drinks, and see what it is does to your matching. Water baths can alter the temperature of your warm drinks to the degree, as well as trying lighter cocktail recipes without mixing with ice or water may also work (cue Scaffas) by changing an originally cold drink to room temperature. This consideration your cocktail may be the difference of your match flying or flopping.

I love wine. I really do. I see wine as an easier selection process I can rely on when approaching a meal. Wine is forgiving. As sure as going for Chardonnay with chicken or Cabernet with red meat has never failed, contrasts to that I've had pleasurable experiences drinking Pinot Noir with fish, and steak and Champagne. The point is not that Sommeliers have it much easier than us cocktail bartenders, but the degree of difficulty in obtaining a cocktail match of acceptability is much higher for us. Thoughts on temperature, size, contrasts and alcohol strength all need to be examined. Consideration of a guest’s experience drinking cocktails with their meal will always be set against an accomplished yardstick of ‘delicious’ that is wine.

With forethought of the above, as well as working more closely with our chefs and sommeliers, I’m convinced cocktail matching can move from trend to staple. Cocktail matching may not necessarily be solely about matching just cocktails with food. Adapting drink selections to match the dish by including cocktails, wine and beer may even be the best way to enhance a diner’s experience. This openness together with the adaptability to step away from the standard paradigms we adhere to in mixed drinks are both key.

Some of the most gratifying pairings can come from humble outsets, some even whilst being in your underwear. These lightbulb moments can happen any day, and although I've never met the genius that ate chocolate after brushing their teeth I'm sure they would say the same thing. Being open to the contrast in flavours, brave with experimentation and thoughtful of the guest’s holistic experience are paramount to successful food and cocktail pairings.

Oh, and for the record no, you can’t serve stale crisps in your bar.