WORLD CLASS has partnered with renowned future consultancy, The Future Laboratory, to delve into the future of cocktails and reveal the trends set to revolutionise our drinking experiences. The WORLD CLASS: Future of Cocktails report explores an exciting cross-pollination of cultures as globe-trotting cocktail drinkers spark new experiences, court controversy and over-turn boundaries. Launched at the WORLD CLASS Bartender of the Year Global Final competition in Miami, the report reveals the top trends and themes to look out for…

The Context: As we spend more time online, we are more opinionated than ever. In turn, people are looking to brands to do the same and stand for something - 40% of people say we want a purposeful brand.

Controversy Cocktails – The Trend: When it comes to cocktail making, forward thinking bar owners are ditching the traditional rules and reclaiming their creativity – making what they want to make, in the way they want to make it…

Once upon a time, the customer was always right. The next generation of bartenders are more willing to voice their opinions and giving up on trying to please all of the people, all of the time. You wouldn’t go to a Michelin starred restaurant and tell the chef how to dress a salad, so why tell an experienced bartender how to make a Mojito?

As Benjaḿin Padrón Novo, owner of Mexico’s Licoreria Limantour explains: “I always get customers asking me to sweeten the drinks we serve, even though by doing so it’ll dilute the taste of the spirit or the fruit. So, now, we just say no – and explain our reason to the guest. It’s all part of the education process.”

To exhilarate and trigger a reaction from customers, bars are starting to add theatre to the experience, leaving a strong impression with patrons.

At Operation Dagger in Singapore, a dramatic cloud of lightbulbs on the ceiling greets drinkers, while owner Luke Whearty’s installation of fake CCTV cameras in the toilets adds a provocative dynamic. His cocktails are pure theatre too: vodka infused with pH-sensitive blue pea flower and bright lemongrass, which when mixed with champagne, the bubbles transform the cobalt liquor into fluorescent pink. 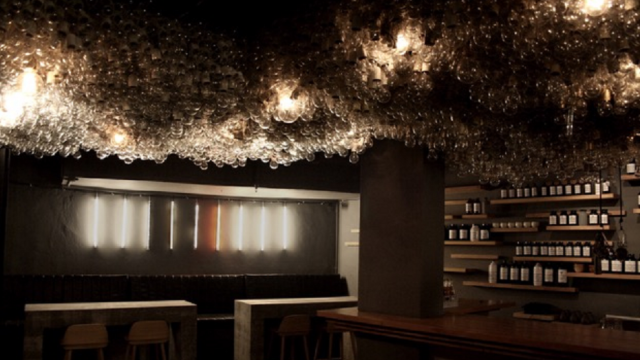 Cocktails have evolved significantly over the years but menus have stayed the same…until now. Innovative bartenders are now going against the traditions of the trade and thinking about new creative ways consumers can relate to drinks and navigate the menu. Rather than having traditional names of cocktails, new menus invite exploration and engage with the drinker. Trick Dog, in San Francisco, has replaced all cocktail names with astrological signs and Pantone colours, while Fragrances at The Ritz-Carlton in Berlin is the first bar where you can order drinks based on perfumes and aromas. 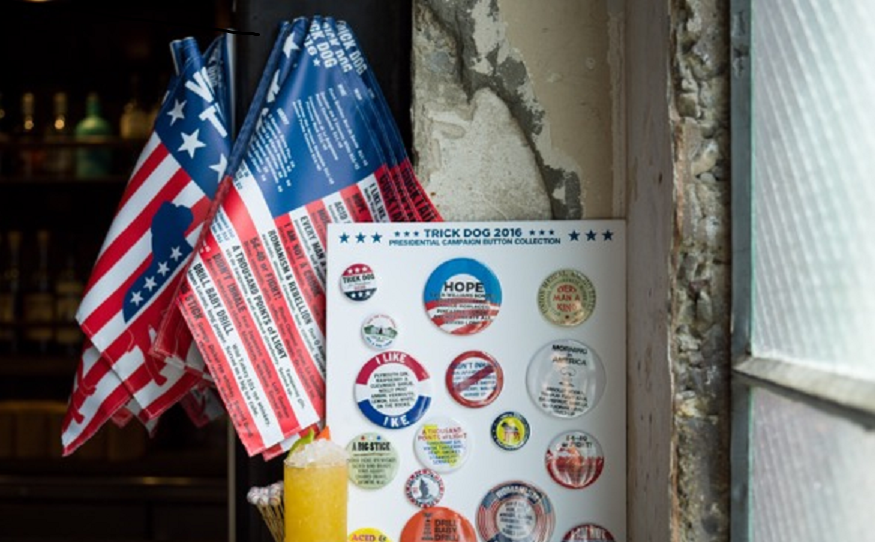 The Context: In a world where people now value experiences over possessions, we are seeing the rise of the emotional economy with people looking for deeper connections to brands.

Emotional Cocktails – The Trend: Bar tenders have always been early adaptors when it comes to connecting with people – the social aspect of their job gives them a strong insight into how people think. Trendsetting bar owners and drinks brands are now establishing even more innovative ways to connect deeper with customers…

In the next decade, look out for bars who ditch the traditional menus and list their cocktails by mood instead. Drinks will be tailored to conjure a specific emotion – you may be given a red cocktail to stimulate confidence, a yellow one for friendship or a black drink for discipline.

Using sense of sight and smell to direct cocktail drinkers’ emotions, Seymour’s Parlour in London is using scent to plug into pleasurable and nostalgic memories, emitting the smell of freshly-mown grass to summon images of spring and smoked pine to plunge guests into a cosy autumn evening. So far bartenders have been sticking with happy thoughts. “I haven’t seen anybody try to toy with negative emotion, but it’d be really interesting to see if a bartender could,” says Kat Rudberg, founder of subscription cocktail box service Crafted Taste.

Cocktails are now being used to tell a story and transport drinkers to exotic places. Local spirits such as Baijiu (distilled from wheat or glutinous rice from a 5,000-year-old recipe) are being used to introduce people to Chinese traditions.

Forward thinking bar Artesian in London taps into the personal experiences of customers asking about recent holidays and creating a cocktail that captures that mood and essence in a glass.

Food and drink have always held a strong and complex emotional charge, giving bars and restaurants a head start when it comes to connecting with customers on an emotional level. People are looking for instant connections to savour the here and now and bartenders often fit the bill. A new trend, ‘the micro-friend’, sees bartenders focusing on building relationships with customers in the short time that they have with them. According to Australian Tim Philips, former WORLD CLASS Bartender of the Year, some ‘micro-friendships’ are built in as little as 30-45 minutes, equivalent to the time it takes to drink one cocktail.

“Making a micro-friend is all about getting that emotional connection with someone quickly and definitely has an effect on how much people like your bar,” he explains. So expect your bartender to ask you questions about your weekend, work and family life to turn you from a customer into a friend… 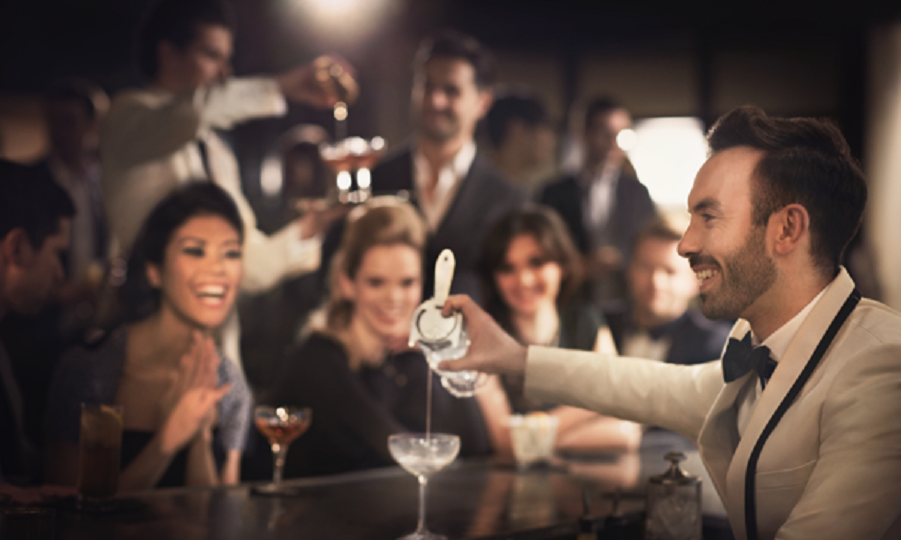 The Context: According to the UN, a record 232m people are living outside the country in which they were born. Considering ourselves ‘borderless’, we define ourselves more by our lifestyles or musical tastes than we do by our country of origin.

Fluid Identity Patrons – The Trend: Ahead-of-the-curve bar owners are catering for drinkers who have a healthy disregard for conformity…

The days of drinks being considered ‘manly’ or ‘girly’ are over. Boundaries are blurring and as society evolves beyond traditional gender norms, people are feeling liberated with their choice of tipple. Bartenders are now using ‘gender neutral’ language to describe, name and serve cocktails.

As consumers become more clued up and demand more at the bar, the role of the bartender is evolving too. Global competitions such as WORLD CLASS Bartender of the Year show how professional bartending relies on sharp skills, creative vision and an ability to wow; fluid identity in action.

Alex Kratena, founder of global drinks collective P(OUR) explains: “The best bartenders now have to keep up with the assertive, knowledgeable and worldly cocktail drinker - so they have to be at the top of their game and offer that extra something”. 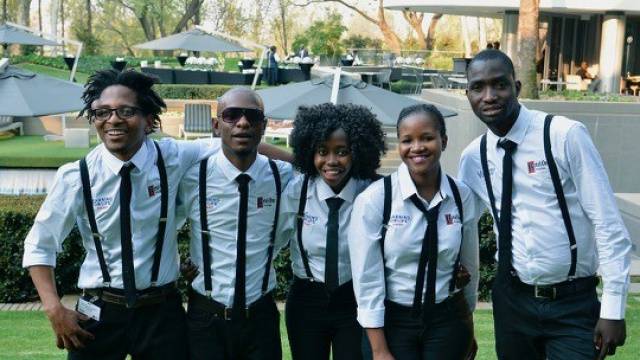 This has led to exciting career prospects as bars invest in their staff more than ever, sending them around the world to develop local heroes that will further grow the cocktail scene. Licoreria Limantour supports its bartenders who save up to train abroad in order to hone their skills, while Outrage in South Africa equips staff with all the skills they need – from sourcing key ingredients and tools to running a full service bar. Likewise, Diageo’s Learning For Life programme provides young unemployed people with coaching and specialist bartender training, opening the door to the profession.

Bartenders are a multi-talented bunch, increasingly with fluid identities of their own. Part chef, part barista, part patissier – this role now extends far beyond the bar.

Former WORLD CLASS Bartender of the Year Charles Joly is renowned for sourcing ingredients and spirits in the mould of a chef, and presenting drinks just like a cleverly crafted dish at his Crafthouse bar.

Pushing the boundaries still further, these multi-skilled bartenders are challenging their customers over what constitutes a cocktail. “The most memorable course I had at The Clove Club, was this hundred-year-old Madeira,” says Mike Knowlden, co-director of Blanch & Shock. “They pour you a tiny bit, which you get to taste, and then they pour a duck consommé over the top, and it becomes a duck soup effectively. It left me with a fascinating thought: why can’t a consommé be a cocktail?”

“Cocktails have evolved far beyond their classic form of a mixed liquid in a glass. Creative bar staff equipped with the latest ingredients, technologies and ideas are changing the whole concept of the cocktail – and leaving us all thirsty for what comes next,” says Tom Savigar, Senior Partner, The Future Laboratory.