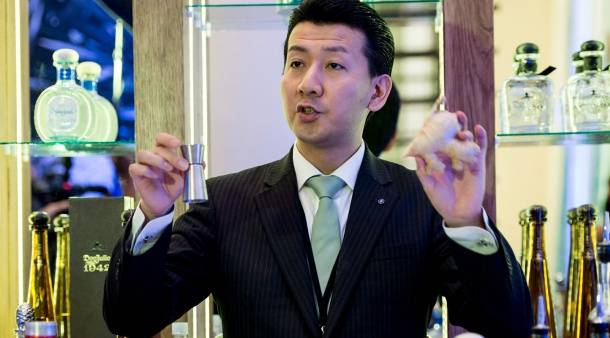 Manabu has been bartending for 15 years, and is currently stationed in a bar 40-storeys high at Tower’s Bar “Bellovisto” at The Cerulean Tower Tokyu Hotel, Japan from where he overlooks the surrounding downtown Tokyo skyline from Shibuya.

Manabu is not the reserved Japanese bartender you might expect. He’s altogether more relaxed, exhibiting the precision that Japanese bartenders have become renowned for, but not afraid to inject his own personality into the job. Having started on the restaurant side of things, he remembers being transfixed by the sight of a bartender across the room, shaking a cocktail and holding the attention of a group of customers. He was only 19 at that point, and had to wait until he was 20 in order to legally sell alcohol, but he’s never looked back. He’s got something of a western outlook on mixology too, saying vodka is his favourite category due to its smooth, clean character. Japanese alcohols such as sake and shochu, he says, are still traditionally drunk straight rather than mixed in cocktails.

Since being named Diageo Reserve World Class Bartender of the Year 2011, Manabu Ohtake has travelled the world meeting and inspiring new talent, providing fine drinking training seminars and guest bartending at some of the world’s most preeminent bars. He has been featured in countless media including TV, radio and magazines and has experienced a new found level of celebrity within the industry.