In Sydney, Australia there are currently 28,456 members of a (closed) Facebook group called the Sydney Bartender Exchange. The members of this group aren’t just people who work in Sydney’s hospitality scene, instead the members have actively subscribed to a professional forum devoted to the emerging profession of bartending.

I grew up bartending in Melbourne, a city only one hour flight away from its more tourist-beckoning sister city Sydney. With an equal number of respected bars and bartenders, Melbourne too has an online exchange for local bartenders, with a staggering 29,537 members (and counting).

Forums such as these as well as the online World Class Club are established across the world in developed cocktail cities, and they enable bartenders to connect with tens of thousands like-minded people from the tip of their fingers. Asking questions such as ‘Who is the distributor of Bulleit Rye?’, or starting discussions around appropriate ice levels in Mojitos are not uncommon, and generally within minutes you’ll have your answer or you’ve started an online discussion. Whether it be in Europe, Japan, North America or Australia, we’ve always had the opportunity to seek answers from people with more knowledge than ourselves.

Unfortunately for me, when I started bartending fifteen years ago this platinum age of online discussion and sharing of knowledge didn’t exist. However, I was lucky enough to work with some great mentors who guided me towards the right avenues, and who were first to show me techniques that I still honour today. But what if I didn't get that opportunity? What if I was born in a region less developed in cocktail culture and with no mentors in the real or virtual world, would I still have the drive to be the professional I am today? I’m not sure I would.

Resilience and patience are virtues every bartender needs in order to work the hours we do, deal with the difficult clientele we sometimes face, and to continue to push our craftsmanship forward. In cities with no history of drinking discerning cocktails, bartenders are forced to start from scratch. With little help from local mentors or online forums, they are continuously struggling with customer expectations, liquor distributors, and developing palates. For bars like Siete Negronis in Santiago Chile, this is exactly the dilemma they face daily.

A summer night walking through the main streets of Santiago is a sweaty dance of patience. Sidestepping vendors selling Completos (fancy hot dogs), peddlers pushing diluted Pisco Sours, and with loud drinking barns serving longnecks of local lager at happy hour, you have to urge yourself through. Get through and you will reach the gentrified Barrio Bellavista, a corner of the city reminiscent of the less touristy parts of Barcelona. A Santiago SoHo, if you like. Here you will struggle to find a cheap beer. That option is being swallowed by craft beer enthusiasm, and the confectionary street ‘Piscolas’ are replaced with quality mixed drinks in newly opened cocktail bars.

Refreshingly for the locals and visitors like myself, Siete Negronis has a sign and is located on the main street. You don’t need to know a secret password, handshake, or have to step through a Photo Booth to get in, because it’s just a local cocktail bar. And it’s a good one.

Siete Negronis opened in a country famed for their high volumes of wine and one cocktail, the Pisco Sour. Yet it is devoted to one of the most austere, polarizing drinks for inexperienced drinks enthusiasts, the Negroni. That takes some proverbial ‘testiculos’ in a city where the cultivated cocktail climate is still in its infancy.

For owner Fernando Costa the decision to open Siete Negronis was to push his own craft as well as to inspire local professionals in Chile. Costa wanted to showcase a bar not only serving Pisco Sours (though theirs are excellent), but a cocktail that in Costa’s words is “emblematic of mixology and related to quality”. 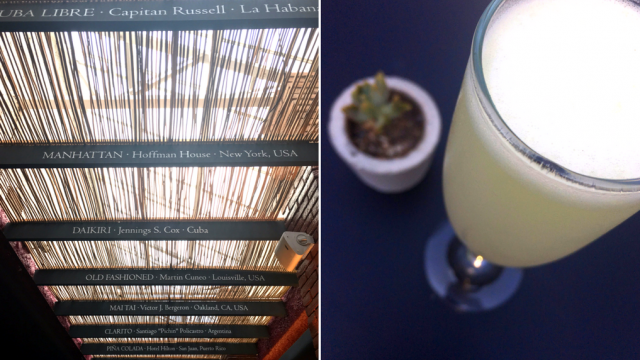 (Left- Entrance at Siette Negronis - The entrance to Siette Negronis. Right- Pisco Sour, Chile's national drink; the Pisco Sour can be a minefield when it comes to finding a good one. Luckily we succeeded. Then we ordered this, a Don Julio Blanco Sour.)

Costa, who as well as being the co-owner of the most highly regarded bar in the city, also works as a Diageo Bar Academy trainer. Alongside other local trailblazers such as Ricardo Guerrero, Matias Supan and a handful of others, Costa success is attributed to Chile’s ongoing emergence. Together they are on a mission to change the climate in a city where until recently there has been little to no local support.

Besides these individuals, part of this revolution has to be credited to brands. Time and funds devoted by companies, such as Diageo and programs like World Class, are investing in the professional development of bartenders. Seminars from travelling brand ambassadors, local training sessions held by Diageo Bar Academy, sharing of online content, as well as trophies and bragging rights bestowed with global cocktail competitions all add up.

Thanks to the ongoing support and respect for our trade the cocktail world is becoming a more unified community, and it’s obvious that the gap is closing. It’s becoming far easier to find a perfect drink wherever in the world you might be, even in places you previously never could. Salute to that! 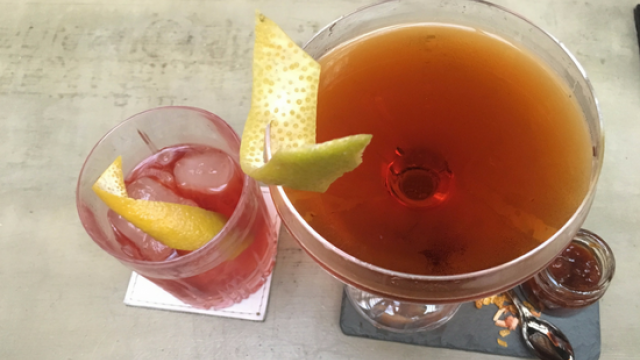 (Two Types Of Negroni - At Siette Negronis you will find a number of variations on their namesake cocktail. Here's two of their variations with Tanqueray No. 10.)

Stir all ingredients over ice for 30 seconds.

Strain in to chilled cocktail glass.

Add three leaves of fresh sage to cocktail to gently macerate whilst drinking.