Strainers – in their various shapes and sizes – allow greater control in creating a cocktail’s texture and are a quite recent addition to the cocktail bartender’s toolkit. Today, we look at the types, functions and drinks suited to different strainers as we consider the fine art of straining.

THE FUNCTION OF STRAINING

After shaking or stirring a mixed drink, one of the last steps in making a cocktail is straining. Put simply, the function of straining is to remove any ingredient residue or unwanted ice by pouring the drink into a glass over a strainer.

We can dress it up fancy and get into technicalities, but at the end of the day the objective is to keep the unwanted bits and pieces (ice included) from your finished cocktail. 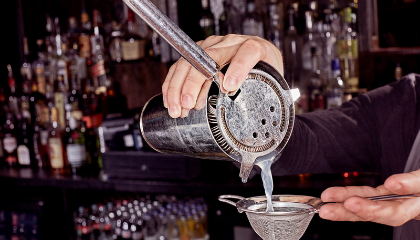 3 TYPES OF STRAINER (AND VESSELS)

There are 3 types of strainer used when making cocktails: a Hawthorn strainer, a Julep strainer and a fine strainer. The latter is a very fine sieve and is only used with either a hawthorn or Julep strainer to act as a secondary filter for finer ingredients.

What: The most common and versatile type of strainer is a Hawthorn strainer, which is used with a metal shaker tin for straining shaken drinks.

They are typically fitted with a metal coil spring and prongs to fix to a vessel easier.

The spring gives a Hawthorn strainer flexibility to enable it to work with different sized shakers or glassware.

Why: In comparison to Julep strainers, a hawthorn is generally bigger and gives better texture to most drinks by allowing more aeration of the shaken drink to reach a glass. This vitality is something that is arguably lost when drinks are double strained. Whilst there are Hawthorn strainers available narrow enough to fit mixing glasses, there are occasions that call for a Julep. 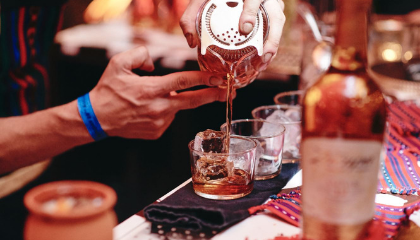 What: Julep strainers are usually perforated metal sieves with a wider face. They are fitted for mixing glasses and therefore more commonly used to strain stirred drinks.

Why: As mentioned, a Hawthorn strainer lets more aeration into drinks, so Juleps are a natural choice when you’re looking for silkier, velvet textures in a drink.

Technically a bartender can get away with using one type of strainer, so long as it keeps ice and any remaining ingredients out of the drink it’s doing the job. But a Julep does look great and allows a little more control with the advantage of visibility - being able to see the drink as you pour.

It’s worth having both a Julep and Hawthorn on hand to craft different drinks; ultimately, if they’re performing their basic function then the primary difference between the two is the texture you’re looking for in a cocktail.

What: A fine strainer is a fine sieve like tool which is also sometimes referred to as a tea strainer. You use it directly over a glass when pour the cocktail through it to strain the liquid a second time.

Why: There’s a case for arguing you can overdo it with a fine strainer with some claiming a drinks vibrancy is lost when it passes through too many filters.

However, fine straining is particularly useful when a drink has ingredients, like mint leaves, that break up to smaller bits and easily slip through a Hawthorn or Julep. 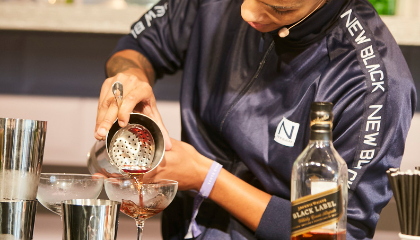 Oooh that new strainer smell… let’s take it for a spin.

If you’ve a Hawthorn on hand, try out something frothy – like an old school Whisky Sour a funkier froth like a Bulleit Apple Mustard Sour.

Try making one with a Julep strainer and then double-straining one; then taste side by side to note the differences each strainer brings to the cocktail.

If you’ve a double strainer on hand, try a lively, vibrant cocktail like a Clover Club – try making two versions, with and without a second strain, and see for yourself if the drink loses any vitality.