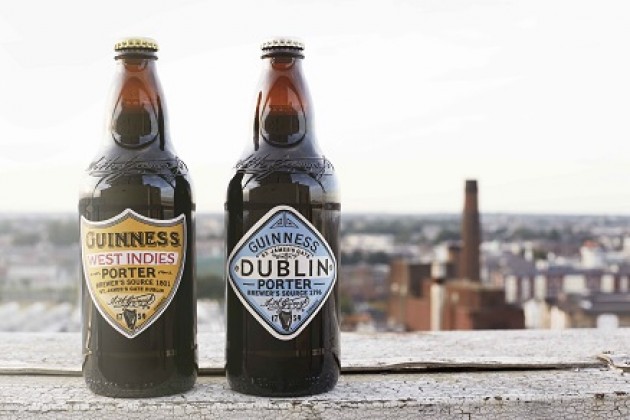 Inspired by authentic recipes, whose origins lie in the historic GUINNESS’ brewers’ diaries from the late 1700s and early 1800s, the new beers will be available in selected pubs and retailers from mid-September.

Combining a rich heritage of 255 years of beer making experience and a proud legacy of innovation, GUINNESS DUBLIN PORTER and GUINNESS WEST INDIES PORTER are the first releases from a new brewing project at the St. James’s Gate brewery in Dublin. ‘The Brewers Project’ gives GUINNESS’ enterprising brewers license to explore new recipes, reinterpret old ones and collaborate freely to bring exciting beers to life.

The new porters started their journey in GUINNESS’ pilot brewery, home to all brewing innovation and craft at St. James’s Gate. The brewery is a hub of beer exploration, innovation and passion, where some of the best and brightest brewers have been busy brewing and refining their technique since the dawn of the industrial revolution.

With origins in a 1796 entry in GUINNESS’ brewers’ diaries, GUINNESS DUBLIN PORTER was inspired by the golden age of porter in the 1800s. This was a time when porter was the working man’s beer and after a long day’s work in Dublin or London, GUINNESS would have been a respected choice. GUINNESS WEST INDIES PORTER is based on an 1801 diary entry for the first GUINNESS purposely brewed to maintain its freshness, on long sea voyages to the Caribbean and beyond. To guarantee the best quality upon arrival, GUINNESS brewers made a porter with more hops and a higher gravity. With their distinctive tastes, these new porters will offer beer lovers in Ireland and the UK something different and a fresh take on what’s been enjoyed for centuries.

TASTING NOTES: complex yet mellow, hoppy with notes of toffee and chocolate.
ABV: 6.0%