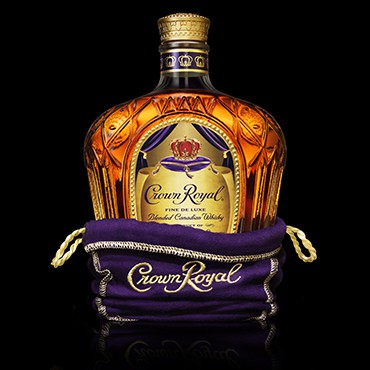 Crown Royal is the number one Canadian whisky in the world, and the sixth largest spirits brand in the United States.

Crown Royal, Canada's leading premium Canadian whisky, has a tradition as rich and distinctive as its taste. The exquisite blend was painstakingly created from 50 selected whiskies, to commemorate a grand tour of Canada by King George VI and Queen Elizabeth in 1939 and was placed aboard the Royal train. Crown Royal's smooth, elegant style is considered the epitome of Canadian whisky.

Lighter than Scotch whisky, Crown Royal is known for it rich flavour and pleasant bouquet, making it an ideal spirit served on the rocks, straight up, or in a variety of cocktails.

The blending process is a magical alchemy of art and science. The Crown Royal blenders are tasked with creating a consistent whisky year after year using learned scientific principles and gifts of the palate with which they were blessed at birth. It is these masters of whisky who complete the process that produces the best-quality Canadian whisky in the world.

The famous Crown Royal purple bag has been used to do a lot more than hold bottles of Crown Royal. Fans have been seen creating unique items from them ranging from car covers, bartenders vests.

Explore our recipes:
To find a world of popular and exciting serves featuring Crown Royal.

Range:
This brand’s most renowned expression, Crown Royal Deluxe - defined by smoothness and enhanced by a rich, lingering finish - but it offers other variants to suit more styles and tastes.