From the Old Fashioned to the Negroni, the resurgence of classic cocktails is stronger than ever. So the next time you’re serving one, why not add an extra flourish and wow your customers with a few facts (or mysterious rumours) about their history? 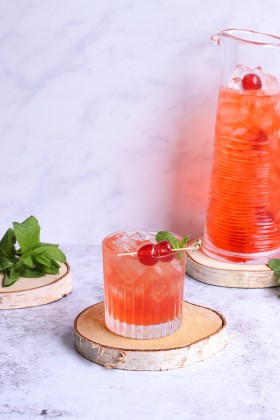 Of course, most classic cocktails have been around for hundreds of years. This means their origins may be a bit murky, but people enjoy listening to stories about them nonetheless. For example, people still love to repeat the legend that Winston Churchill’s mother invented the Manhattan, even though it’s been proved wrong! We’ve rounded up some well-established cocktail origin stories for you to share with customers, and help make their experience at your bar one to remember.

WHY IS IT CALLED THE MARGARITA?

The Margarita might have the most numerous origin stories of all of the classic cocktails. One of the most popular tales is that it was invented in 1938 by Carlos ‘Danny’ Herrera, a Tijuana-based restaurant owner. He allegedly created the cocktail for a frequent customer, Marjorie King, who was allergic to all types of alcohol except for tequila.

Other claims for the Margarita crown include a Mexican barman turned milkman named Francisco Pancho Morales, who is alleged to have created the cocktail in 1942. There’s also the Dallas socialite, Margarita Sames, who claims to have invented the drink for one of her house parties in 1948.

It’s also widely thought that the Margarita evolved from the Prohibition era Mexican drink, the Brandy Daisy, by substituting tequila instead of brandy. (Daisies are a family of cocktails made up of a base spirit, curacao and citrus, such as the Sidecar). In Spanish, the word Margarita means ‘daisy’, which potentially backs up this theory.

This well-loved cocktail typically consists of tequila, orange liqueur and lime juice and is served with salt on the rim of the glass. It is often served in a Champagne coupe or Martini glass, but a Rocks glass is a classic choice that makes it easy to salt the rim.

TWO MARGARITA RECIPES WITH A TWIST

WHY IS IT CALLED THE OLD FASHIONED?

It is widely agreed that the Old Fashioned wasn’t ‘created’, but evolved over a period of time from another drink, the Whisky Cocktail. It also happens to be the first cocktail ever recorded back in 1806!

The Balance & Columbian Repository of Hudson, New York mentioned and later defined the cocktail as “a stimulating liquor, composed of spirits of any kind, sugar, water, and bitters”. It later became known as the Old Fashioned.

Bartender lore tells us the drink was created at the Pendennis Club in Louisville where people asked for a cocktail “the old-fashioned way” i.e. using sugar and bitters to make harsh alcohol taste better.

The simplicity of the Old Fashioned’s ingredients provide endless opportunities for creativity. Why not try one of these recipes for a fun twist on the classic?

WHY IS IT CALLED THE NEGRONI?

The most popular story behind this classic cocktail is that it was first mixed in Florence, Italy in 1919. Legend has it that a nobleman named Count Camillo Negroni asked for his favourite cocktail (the Americano) to be strengthened by replacing the soda water with gin.

He also asked for the traditional lemon garnish to be replaced with orange peel, and so the Negroni was born. Today it is often served as an aperitif, but is versatile enough to drink on any occasion.

Legend has it that Hemingway loved the Negroni so much that he named one of his dogs after it. The Negroni has grown so much in popularity over the past decade that it has its own annual celebration, Negroni Week. Started in 2013, over 6,000 bars now celebrate this iconic serve!

THREE NEGRONI RECIPES WITH A TWIST

Diving into the history of classic cocktails is fascinating, and with so many differing accounts, there’s plenty of room for romance and maybe even a little poetic licence next time you tell the tale to a customer!

Loved learning about the origins of these three classics? You can delve into the histories and entertaining stories behind three more classic cocktails here.