From whisk(e)y on the rocks to whisk(e)y highballs, this is one category that shows no signs of slowing down. So, what’s next? A new Irish whiskey, that’s what! We find out more about Roe & Co, the latest offering from the Emerald Isle and serve up some cocktail inspiration for you to try. 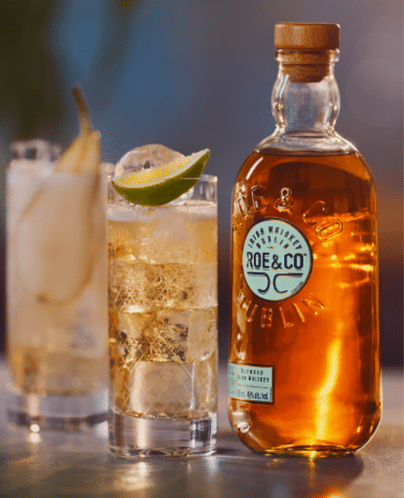 A nip of history

It’s a little-known fact that the Irish – not the Scottish – are credited as being the first to introduce whiskey to the British Isles. Ireland was once the undisputed ruler of the whisk(e)y world, boasting over 30 distilleries and far surpassing its Scottish rivals across the water.

Unfortunately, by the mid-1970s, a near-fatal combination of technology, politics and prohibition would see the Irish whiskey industry reduced to only two operational distilleries.

Thankfully, there has been a steady resurgence in the Irish whiskey industry over the last few decades and by the end of 2017, there were 16 operational distilleries with at least 14 more on the way.

Triple-distilled and made from unmalted barley, Irish whiskies are typically smoother and more fragrant than their Scottish counterparts, making them very accessible and a popular choice amongst newcomers to the whiskey category.

Although similar to their Scottish cousins across the sea, Irish whiskeys do have a few tell-tale signs that distinguish them from the rest of the whisk(e)y family:

The recent revival has seen a number of brands appear on the Irish whiskey scene and Roe & Co is one of the latest arrivals. Named in honour of George Roe, a celebrated distiller from Ireland’s golden era of whiskey back in the 19th century, Roe & Co is a premium blended Irish whiskey. Made from the finest stocks of Irish malt and aged in Bourbon casks, it both pays homage to the incredible history of Irish whiskey and celebrates the bright future of the category. Even the bottle reveals a hidden tribute to Mr Roe, with an illustration of the last remains of his original Thomas Street distillery. The creation of Roe & Co was a labour of love for senior blender Caroline Martin, who took two years and over 100 prototype blends before giving it her seal of approval!

How to use it in your venue

With the recent rise in whisk(e)y cocktails, Roe & Co is the perfect partner to get experimenting with. It is bottled at a higher than normal ABV of 45%, which ensures it is a whiskey that holds its own perfectly in mixed serves. Its creamy vanilla flavour and hints of soft spice are the perfect starting point to get creative with.

Ready to create some Irish whiskey cocktails? Here’s a few of our favourites:

Fill a mixing glass with ice and add in all the ingredients.

Stir lightly for around 20 seconds to mix and dilute the cocktail.

Strain into an ice filled Rocks glass and garnish with a fresh mint sprig.

17.7 grams of alcohol* (according to mls of the serve)

Stir quickly and garnish with an orange wedge.

14.3 grams of alcohol* (according to mls of the serve)

Behind the Liquid: Roe & Co 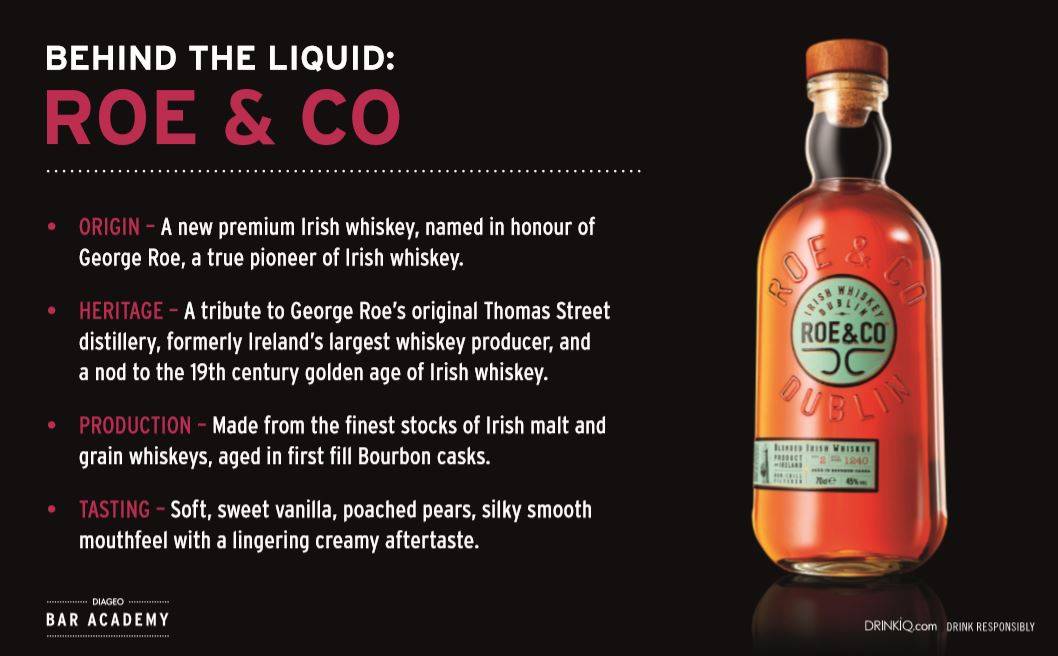