« back to Our Brands 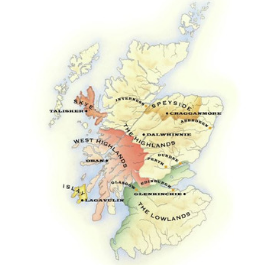 From the Dalwhinnie whisky crafted in the coldest inhabited region of Scotland to Caol Ila whisky on the Sound of Islay, every single Scotch whisky has a character as rich and complex as its history.

The main whisky making regions of Scotland are the Highlands, Islay, Speyside, Lowlands and Campbelltown each producing their own unique whiskies which have become famous the world over.

A single malt Scotch whisky is a whisky that’s produced in batches from only water, malted barley and yeast at a single distillery using copper pot stills.

To be called a Single Malt Scotch Whisky it needs to be made of 100% malted barley, be from just one single distillery and not blended with any other product from elsewhere.