THE STORY BEHIND THE MOJITO

A drink that has navigated the peaks and troughs of fads and trends for decades, championing flavour and fresh ingredients and introducing countless drinkers to the world of cocktails; the Mojito has earned its legendary status. 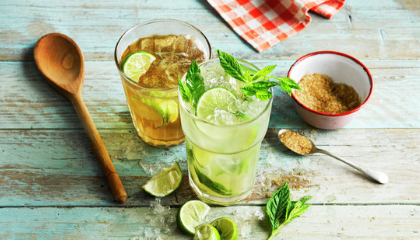 But, as with many cocktail superheroes, its origin story is shrouded in mystery and hotly debated. We trace the story of this quintessential Cuban highball – from the backstreets of Havana to bars across the world – and reveal our Captain Morgan perfect recipe, batching tips and a seasonal riff on this summer staple.

A rumbunctious combination of rum, lime juice, sugar, soda water and mint. The merest mention of the Mojito evokes images of heady Havana nights and takes drinkers to the sunny shores of the Caribbean.

Though its exact origins are the subject of fierce debate, legend has it that we have the famed Sir Francis Drake to thank for the invention of the Mojito.

During his Great Expedition to the New World, an epidemic of scurvy and dysentery broke out aboard Drake’s ship. In desperate search of a cure, a landing party went ashore at Cuba and returned with a local blend of aguardiente de caña (a precursor to rum) mixed with lime, sugarcane juice and mint. Sure enough, the concoction staved off illness and was christened “El Draque” in Drake’s honour.

Fast-forward a few centuries and the humble Mojito, once confined to Cuban farmhouses and beaches, exploded onto the burgeoning cocktail scene, bolstered by the arrival of Prohibition in the States. Havana quickly became a drinking haven for wealthy Americans, who scrambled across the Florida Straits in their droves and were promptly offered a local take on their cherished Mint Julep upon arrival.

Today, the Mojito is one of the undisputed kings of the cocktail world; enjoyed everywhere from Cuba to Cambodia, Havana to Hanoi, and grabbing a spot on most cocktail menus. The cause? Simplicity. A winning combination of flavours that champions good rum and fresh ingredients.

Countless variations and riffs have sprung up, adding inventive ingredients like lemongrass and basil, or substituting the rum for local alternatives, such as tequila (the Mexican Mojito) or metaxa (Greek) – but the original recipe remains intact as the crowd favourite.

Nevertheless, below we examine how to perfect the classic Mojito, consider how to batch for larger volumes and share a contemporary, wintery twist on this dynamic crowd pleaser.

It’s hard to beat a classic. The finely tuned balance of Caribbean flavours; fresh mint, lime and sugar are accentuated with a clean, crisp rum like Captain Morgan White rum, which also brings mellow vanilla and cassia spices to the cocktail.

Hosting a party? The Captain’s got you.

Pre-Batch your White Mojito to save time and reduce wastage. Simply use the formula below:

If you’re feeling adventurous, why not add an exotic twist with Captain Morgan Original Spiced Gold? This crisp, summery blend is filled with fruit and spice notes, like Cinnamon, and definitely gets the Captain’s seal of approval. 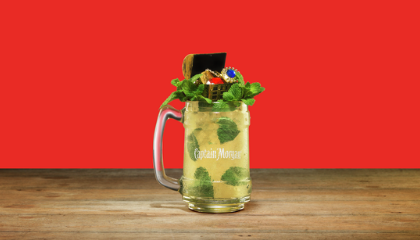 Twist (on a classic) and Shout